I left school with precious little to show by way of qualifications, but, thanks to the deft intervention of a teacher who saw some potential in me, I managed to land a job in a large insurance office. When I arrived for my first day at work, I was socially out of my depth and felt very much like a boy in a grown-up world - even the junior clerks of a similar age to me appeared to have somehow achieved a level of worldly experience, gained by a few months spent in an adult working environment.

Fortunately for me, my desk was positioned between those of Frank and David. Frank and David, much like the other experienced staff in my section, seemed very old to me at the time. In reality they were only in their early 40's. They'd both been with the company for 10 years at that point and had no doubt already realised that, in all probability, they would see out their working lives behind those very desks. It was a job for life, if you kept your nose clean. They, unlike some of our more earnest colleagues, were also wise enough to realise that the job. and indeed life, were not things to be taken too seriously, all of the time. They helped me to do my work well, but they also encouraged me laugh, treating me as an equal, rather than a new kid on the block.

Inevitably, when you're in a close-knit working environment, a little micro-language develops, full of tics, catchphrases and regularly-used terms. Occasionally after work, I'd catch the same bus home as David, sometimes with our favourite conductor on board, who would, more often than not, go into hyper-mode as the evening rush hour progressed, chanting 'Cheers, cheers, ta,ta,ta, thank you, cheers, cheers, ta...' at ever increasing speeds as he charged up and down the packed bus collecting fares. David could gently mimic the guy to perfection, often reducing me to tears at my desk after I'd passed him a file or folder he'd requested. 'Cheers, cheers, ta,ta,ta, thank you, cheers, cheers, ta...', he'd jabber ad infinitum, as I struggled for breath. 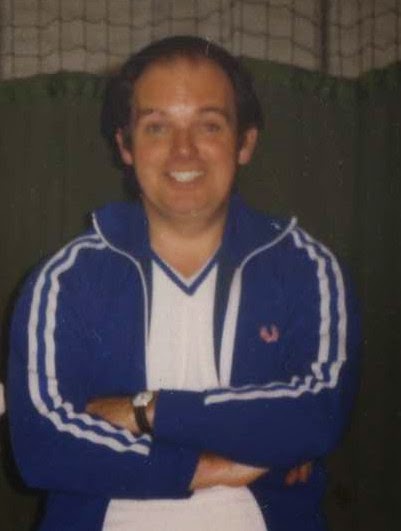 Frank was a mischievous sod too, forever the joker, frequently causing gales of laughter to spread among the desks, only becoming serious when his wife, who worked in the same building, descended the escalator from the floor above. As she came into view, his eyes lit up and he'd smile the smile of a man who was utterly content with his lot and deeply in love.

I don't know the origin of Frank's most used phrase, it was already well established by the time I appeared on the scene. Whenever things became overly stressful or too full-on at work, Frank would grin broadly, stretch out his arms and say 'Easy, easy', as a kind of calming gesture. The words quickly entered my lexicon and I still find myself reassuring myself with them to this day.
I worked at the office for less than two years, but, without wishing to descend into cliché, I went in a shy, socially inept boy and left as a young man with enough self-confidence to work in a customer facing environment for the next 30 years. I'm sure I owe much of this confidence to Frank and David's early encouragement.

A few nights ago, I caught up with Frank again. He beamed that familiar smile as we talked and reminisced. When the time came to leave, I reflected on my first steps into the 'grown-up' world at the insurance office all those years ago and thanked him for the acceptance and friendship he and David had shown, that had meant so much to me. At this point, I confess I became slightly emotional and, spontaneously, I threw an arm around his shoulder and patted him warmly on the back. 'Easy, easy', he laughed.

David died in 2010, ravaged in his final years by escalating multiple sclerosis. Frank passed away a couple of years earlier, shortly after losing his beloved wife. Frank's visit the other night, came in the form of a particularly vivid dream. Our brief period of working together in the office was over 35 years ago, but rarely does a day goes by that I don't think of one or both of them.

Frank wasn't particularly into music, but David was and we would talk about it for hours, when we probably should've been working. He didn't 'get' much of what I was listening to, but was always interested to hear about the records I'd bought or gigs I'd been to. David's era was a little earlier and this was one of his favourites.

We all need a Frank and/or a David from time to time. A lovely story. Easy, easy.

Beautiful. So touching that even your dream should pay tribute to Frank in such a warm way.

As John and C said - a lovely and beautiful story

It's great to hear a different kind of office story. My Daddy spent 40 years in insurance. He worked with so many characters...and many of them became regulars in our live. Frank and Dave sound very familiar. Great story.

Wonderful. Powerful, beautiful dreams like yours are certainly to be treasured. Frank and Dave were clearly gems.

Brilliant story TS and so well written...it made me think of a few pals I have met along the way and I may feature from time to time....Dreams Never End!

Thanks for your comments everyone. I've wanted to write something about these two for a long while, but have never quite been able to find suitable words. Frank's 'visit' was the nudge I needed.