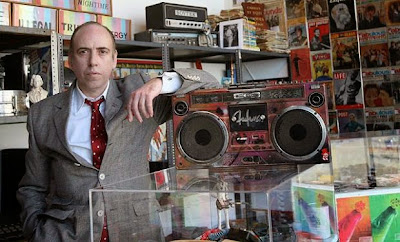 Imagine you kept all your toys and comics from when you were a kid and never threw away any of your books or magazines when you were a teenager. Then you formed one of the most influential bands of the late 20th Century and kept souvenirs of that and all your subsequent adventures too. That's exactly what Mick Jones did and from time to time he displays his vast personal collection under the banner, The Rock'n'Roll Public Library.

I've been fortunate enough to browse through Mick's fascinating collection twice, both several years ago, firstly in Ladbroke Grove and later in Norwich. Now the Rock'n'Roll Public Library is opening its doors once again, this time in Venice! To coincide with the event, Mick Jones is releasing a six track mini-album of atmospheric instrumentals entitled 'Ex Libris'. Excellent it is too. Read more about the whole darned thing here.

Mr. S,
Now, that is my kind of fantasy (and exhibition)!!! When I think of my superhero comic books, Beatles' magazines, Who & Yardbirds Fan Club memorabilia, Paul McCartney Bubble Bath, John Lennon licorice records, not to mention my Northern Soul 45s, and an almost complete (by Label Number) Motown collection to 1968 . . . it just about sends me into a swoon (or a major depression) as they're almost all gone now! ;-(

Still, it's nice to know that someone else stayed the course!

Get yourself over to Venice Marie, you'd love Mick's collection! Alas, much of my own formally large horde of stuff has diminished to nearly nothing, although Mrs S might beg to differ with that assessment!

Nowadays they would call Mick a hoarder. I like to think of him as a collector. As I do myself when people query why I have still got mags and books from my childhood This sounds like a really wonderful exhibition. alas Venice is a bit too far to go. Maybe one day he'll bring it to Glasgow...

Very interesting, Mr. Swede. I took a look at the photos, and Mick really liked the comic books, for sure. Tried to picture him as a lad reading that Flying Nun book on the wall. What a hoot! Was there a lot of Clash material when you visited?

Scott. I don't think he's taken it North of the Border yet. Here's hoping.

Brian. A lot of Clash and Big Audio Dynamite stuff. Stage props, clothes, ephemera. Both times I went the place was full of misty eyed people the same age as me.

This is something I would dearly love to see one day. Mick Jones - one the good guys.

Hope to see you there. Will be adding more links soon.

Well would you believe that, think I will get out some Clash