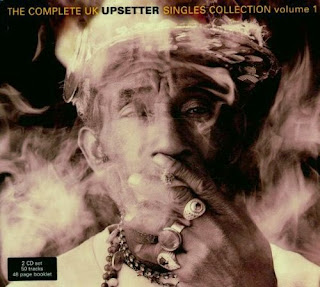 It's been one of those weeks. A ton of great looking posts have turned up on my sidebar in the past seven days and i've barely had a spare moment to glance at any of them. I'll try to rectify that to some extent after the weekend, though by then of course, the backlog will have become even greater. One post I did find time to enjoy was over at 27 Leggies (here) and featured several fascinating covers of the old Jim Reeves hit, 'He'll Have to Go'. My own favourite version of the song wasn't among them though. David Isaacs' 1969 single, produced by Lee Perry, can be found on the splendid 1998 compilation 'The Complete UK Upsetter Singles Collection Volume 1'. Check out those otherworldly backing vocals.

Hear another unlikely country cover by David Isaacs in an earlier edition of Saturday Scratch (here).

This is tremendous, great cover.

Listened to that one twice. First thing I heard today, and it will be tough to beat.

This is a great version from one of my favourite Scratch collections. Big fan of Ry Cooder's take, too. BTW, my blog will imminently implode. Will let you know if any future blog action evolves.

Glad you all enjoyed the tune. I wanted to post this song some time ago, but at the time it was nowhere to be found on YouTube. The 27 Leggies post prompted me to have another look for it.

Returned today for a third go around.

This is pretty good but as you know I a Kimberley fan....he is still the best in my book....I agree with SB the Ry version is pretty tasty too.