One evening, when I was 12, I persuaded Mum to put my long, thick, straight hair in curlers. I've always hated my shapeless hair and, for a couple of hours at least, it was fun to see it tumbling in Bolanesque corkscrews. The following morning, of course, it had dropped back to boring, straight normality. It's hard to believe that Dad didn't grab his camera and record the event. 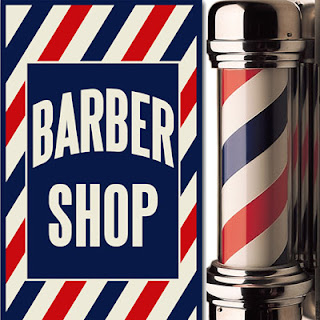 Much as I disliked my boring Barnet, having it cut was the worst. Dad first took me to the local barber's shop when I was four. I was plonked on a plank resting across the arms of the chair and told to sit dead still while the barber clipped and buzzed around my bonce. It was easier said than done. I twitched and I squirmed, particularly when he got anywhere my right ear, which for some reason set off a convulsion down my spine, leading to stern looks from the barber and a stern word from Dad. My left ear was fine, but that right ear always seemed ultra-sensitive to the slightest noise and it was only years later that I learned to control my involuntary reaction.

When the family relocated to Ipswich in 1975, I cast around my new classmates for a recommended local barber. 'Go and see Kenny,' someone suggested, 'Kenny Cuff the dancing barber'. It sounded unlikely, but was actually true. Instead of ambling around the chair while he snipped and trimmed, like your average barber does, Kenny performed a continuous soft shoe shuffle as he worked and was something of a local legend. His salon was a meeting place for a handful of old retired Suffolk gents, who rarely seemed to get their hair cut, but treated the place as a hang-out, smoking cigarettes and drinking endless cups of tea all day. They all thought my London accent was a hoot and good-naturedly sent me up something rotten throughout every visit, especially whenever I twitched as Kenny clicked his scissors close to my right ear.

I loved that one.

I have the pleasure of taking The Boy now...he gets a plump lady that coos over him but no dancing.

My Grandaddy, on my mama's side, lived at his local barber shop...until he got kicked out over arguing about politics! :0

You in curlers and Kenny Cuff The Dancing Barber...?! Oh, the imagery! Brilliant.

Going for a haircut was traumatic event in th 1970s, especially in primary school, because of the "haircut haircut" taunt you got. It scarred me for many many years

Great post Swede, apparently I was like Damien in The Omen when I got taken for a haircut when I was a kid, screaming and squirming all the way up the stairs to the barber's. Think that was why I opted for a crew cut for years, so I didn't have to go as often.

Barbers are an eccentric bunch. My childhood barber had an acoustic guitar, and he would sit in the big chair between customers performing songs from the Everly Brothers.

Thanks for the comments folks. It was only later in life that I realised that practically everyone with straight hair like mine wish that they'd been born with curls, while many of those with wavy hair spend all their time (and money) trying to straighten it! At least I still have hair to worry about I guess, however grey and thinning!