From Ibiza to the Norfolk Broads, Part 2 of 2

One evening after school in 1971, a pal played me 'Get It On' by T.Rex. I was 11 years old at the time and when I listened to the record it was as if a black and white curtain had been pulled aside, to reveal a vivid technicolour world beyond. It was a personal musical revelation. A life-changing moment.

So I've had roughly 44 years to consider what I might say, should I one day be lucky enough to meet Tony Visconti, the producer of 'Get It On' and of many subsequent records that ended up in my collection. I had a close call once, on a bitingly cold Winter afternoon in mid-1990's New York, when we passed each other on the street. We were both wrapped up against the fierce sub-zero winds so that our faces were only partially visible, but I recognised him instantly and also instantly decided that I wasn't going to disturb him in those hostile circumstances. I've quietly regretted that decision ever since. 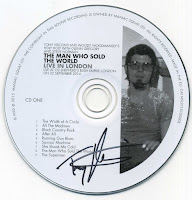 On Wednesday evening (after this show) I found myself in a queue, edging ever closer to Tony Visconti, who was seated signing autographs a few feet away. I had just a couple of minutes of those 44 years left to decide what words I could possibly use to, A) adequately summarise what a profound effect the music he's produced has had on my life, and B) not sound like a gushing buffoon. 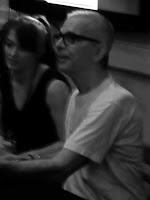 As I drew level with him, Tony looked up, smiled and said 'Hello'. This was my moment. 'Do you mind if I shake your hand?' I said. His smile broadened as he gripped my hand firmly. Quite suddenly I knew exactly what I should say. I didn't need a to make a grand statement or sweeping gesture to encapsulate the years of pleasure this man's work had given me. The solution was far simpler and more obvious than that.

'Thank you', I said, shaking his hand warmly and blinking back the stinging in my eyes. 'Thank you.'

For one moment there I thought you had decided to sing the first lines of 'Chariot Choogle' to Mr. V. Thankfully, you are far wiser. Nice one.

I spoke to David Gedge once at a signing. Like you, I waited in the queue wondering what I was going to say to the man who, along with R.E.M., was largely responsible for a sweeping change in my entire outlook on music. I was certain whatever I said, I'd end up sounding like a complete dork.

Each member of the band signed my CD - and then I got to the man himself. Before I could open my mouth, he looked up, smiled and spoke. "Wow! That t-shirt looks well worn. BringS back memories, that one." I was wearing my old Bizarro tee from 1989 that was, as he noted, "well worn". He broke the ice, I had a brief but not at all awkward conversation with him, and then went on my way. Top, top bloke. Not as famous or acclaimed as Mr Visconti perhaps, but certainly top of the tree as far as I'm concerned.

Now I know why you went to this gig!

Singing Bear. 'Hi Tony. You're like the planets when you move'. Could've worked.

TheRobster. I've been lucky enough to meet a couple of people more 'famous' than Visconti, but your personal heroes are your personal heroes. I can absolutely relate to your Gedge moment. I was desperate not say something I'd regret, even though I could've talked his ears off, as several people ahead of me in the queue did. Now I can play 'The Slider' and know that I've thanked one of the main parties involved - and that's all right with me.

John. You got it!

Your piece is so moving!I met him on Sunday after the Leeds gig & forgot to say thank you for the work he did with Marc Bolan.The
music of Bolan & Bowie means as much to me now as it did then.

This would have been a big moment for me too, and I'm sure I would have made an ass of myself. I like the way you handled it, Swede. I bet your awe bled through the handshake.

Gillian. Thanks for your kind words. I hope the Leeds show was as great as the one I attended in Norwich. In addition to everything else, Tony is a really terrific bass player, something I perhaps didn't fully appreciate before. When he and Woody 'locked in', it was a joy to behold.

Thanks Brian. No doubt some think I'm making a big deal about such a brief moment, but I'm sure everyone has at least one or two people in their life who they hold in similar high regard.

You could have asked him to buy you a pint, Swede, after all, you'd been buying his records, it was the least he could do. I tried this with Steve Hanley just before a Fall gig - didn't work.