From Ibiza to the Norfolk Broads, Part 1 of 2 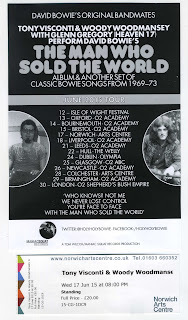 To begin an LP with a song as ambitious in scale as 'The Width of a Circle' is, at the very least, a bold statement of intent. For an ad-hoc band to attempt to cover said LP 45 years later and thus open their set with 'The Width of a Circle' must surely take nerves of steel. At the Norwich Arts Centre on Wednesday, the song was nailed to perfection. It was the first of many. The evening was billed, snappily, as 'Tony Visconti & Woody Woodmansey with Glenn Gregory (Heaven 17) perform David Bowie's The Man Who Sold the World album and another set of classic Bowie songs from 1969-73', and did pretty much what it said on the tin.

The big draws were obviously Woodmansey and Visconti, although the 10 piece band each played their part in impeccably recreating every nuance of the original arrangements of the songs, all of which were welcomed like much loved old friends by the packed audience. To his immense credit, Glenn Gregory did not, at any point, attempt to 'do a Bowie', instead interpreting each song faithfully in his own voice and manner. And some of those songs are hard! Many of us could probably mumble our way through a passable 'Man Who Sold the World', but next time you're in the shower have a go at 'The Supermen' or 'Saviour Machine' or 'She Shook Me Cold'. Gregory did a faultless job on the whole lot. 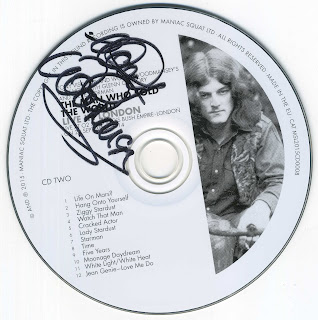 The second half of the set featured 'Time', 'Changes', 'Life on Mars' and no less than 7 selections from 'Ziggy Stardust', including a blistering reading of 'Moonage Daydream', a real highlight of the evening. I briefly met Woody after the show and he was pleased with my observation that the pure joy of playing those wonderful songs was evident to everyone and literally poured from the stage. The show lasted two hours, it felt like 10 minutes. A great night.

Absolutely terrific performance of Width Of A Circle, GRAET stuff. Glenn Gregory looks like he's having a great time singing.

They all seemed to be having a ball. Glen Gregory seemed to be almost pinching himself to make sure that he wasn't dreaming. Terry Edwards is on the latest tour in place of Steve Norman.

It must have been wonderful, I can feel the good vibes just watching this clip - these things don't always work for me, but this one really does. As George says, Glenn's wide smile just says it all too, what a buzz.

I was initially a bit sceptical, but the music was performed with such love and attention to detail that any doubters were surely won over by the end of the first bar of 'Width of a Circle'. Visconti didn't speak very much, but when he did it was to warmly remember fallen comrade Mick Ronson and remind the audience that this wasn't a tribute band as such, 'Woody and I are THE guys'.

What a terrific idea and it's wonderful that they obviously pulled it off with such panache. With Tony Visconti involved it was never going to be anything less than credible but this sounds truly great. Do you think that we may be reaching a stage when it will become utterly acceptable for 'interpretations' on an artists work to be played to the public in a way comparable to the way the classical world takes on the great composers? I suppose it already happens in jazz to some degree. It is, of course, complicated by the fact that (a) we have the originals to listen to and (b) they were created by, primarily, *performing* artists in the first place.

Agree Swede. I was sceptical too before I saw the show in Glasgow but before too long I was enjoying every moment and Woody and Tony are the guys!

I'd always give shows like this a wide berth. I know why they put them on and why punters like yourself shell out big bucks to go and see them. But, at the end of the day, despite what Visconti may say, they're a tribute band: in the same way that Bruce Foxton fronts a Jam tribute band. To hear an iconic album that even Bowie, were he still performing today, wouldn't play in its entirety, is obviously the draw. Anyway, I shouldn't get too sniffy about it - if it works for you, that's all that matters.