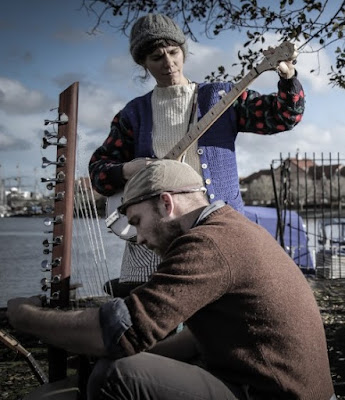 After a short mid-season break, I was back on the gig circuit just before the weekend to see Bristol based musicians Rachael Dadd and Will Newsome. Rachael collaborates extensively with artists such as Francois & The Atlas Mountains, This Is The Kit, and Rozi Plain and also has a clutch of releases under her own name, the most recent of which, the beautiful 'We Resonate', featuring among my favourite albums of 2014. On Rachael's current tour her collaborator is her sister Betsy, an animator and film maker. As Betsy's 30 minute film plays on a screen behind the stage, it's accompanied by a live uninterrupted suite of songs from Rachael at the piano. At the outset Rachael explained that this was something very different for her, which indeed it was, but it was nothing short of a triumph - I was completely lost in the presentation for the whole half hour. I asked her after the show if she had any plans to document the audio/visual performance at some point and she appeared very keen to do so - I really hope it happens. Following the film portion of the set, Rachael played a few songs from 'We Resonate' in a more familiar style, accompanying herself at various times on guitar, banjo and ukulele, before calling support act Will Newsome to the stage to duet on 'On We Skip', from an album the pair made together in 2008.

Will Newsome's solo supporting set was every bit as compelling as Rachael's. He plays the kora, an instrument I've been fascinated with since picking up Toumani Diabaté's 'New Ancient Strings' album in 1999. The kora is an unfathomable instrument to me - it faces the player who usually appears to be keeping a half-a-dozen tunes going at once, in spite of barely moving their hands. As if that wasn't enough to keep him occupied, Will sings too. His set was a treat and the performance of 'Not a Dead Bird' was particularly memorable, featuring an intricate extended instrumental passage. Here's Will introducing an al fresco version of that very song, followed by the 2014 video for Rachael's 'Strike Our Scythes' and finally the two of them together on the original studio recording of 'On We Skip'