I was laid low by a nasty bug for much of last week, though I couldn't rightly tell you if it was of the 48, 60 or 72 hour variety, as I became so feverish that time no longer had any real meaning to me. I poured with sweat, then became teeth-chatteringly cold, then hot, then cold, with the cycle repeating over and over again as I thrashed about in vain search of sleep. I seem to get these bugs about once a year - here's hoping that was the last one for at least the next 12 months. 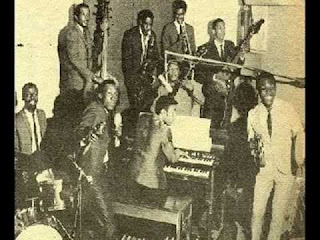 Ace Studio One session band The Soul Brothers (also known as The Soul Vendors) featured former Skatalites members Jackie Mittoo, Roland Alphonso, Johnny Moore and Lloyd Brevitt, though they quickly moved towards the emerging rocksteady sound. The 1967 Clement 'Coxsone' Dodd production, 'Hot and Cold', is an instrumental version of 'Let the Light Shine' by The Ethiopians, released the same year.

The Soul Brothers - Hot and Cold
Posted by The Swede at 07:00

So sorry to hear about the bug. Certainly hope you stay free of them for the foreseeable, sounds nasty.
'Hot and Cold' has a very theme-tuney vibe to me, I can imagine it being used as the theme to a 1970s TV programme for some reason - like a Sunday lunchtime arts/news show, hosted by Melvyn Bragg!

Man-flu is a bitch, isn't it. Glad you're up and running again. Really enjoying this series.

Tune. And then some.

Hi Mr. S,
Sorry to hear that you've been lurgied!

I checked my feed and it's on. It also seems to be updating okay on Charitychic's blog, so would you mind giving it another go?

Thanks for the good vibes one and all!