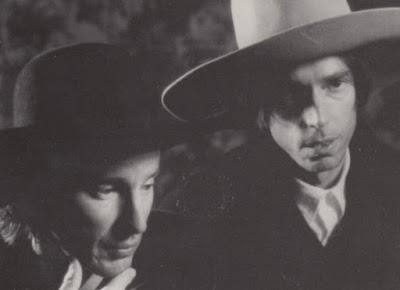 Cowboy Nation - Cowboy Way
Posted by The Swede at 07:00

It's bugging me that the lead vocal sounds helluva familiar.

You mention three bands in your piece, and Rank and File is the one I know well. Was introduced to them at a young age via an excellent Slash Records compilation called Slash: The Early Sessions. Been a fan ever since. Thankfully, I still have that comp and will feature it in my vinyl-ripping series if I ever get to that section of the shelf. These songs you feature today are right in my wheelhouse.

My fave rave cowpunk band were the Liquor-Fueled, Top Rail Dragster Of Rock®... Dash Rip Rock from New Orleans. Many's the night I would see them ripping up the stage and passing bottles of Jack Daniels among the audience. Not a drinking man, but damn, those were fun times. Especially if you awoke without a hangover, like me. Bill Davis wrote some tender songs but you would not know it from their "goes up to eleven" live performances.

Daring of those guys to take on so many genres. I can kind of understand the desire to change, playing the same sort of music for years can become uninspiring. When do you think they were at their best Swede? punk, cowpunk, post-punk, or country? Maybe the answer is in the songs you shared