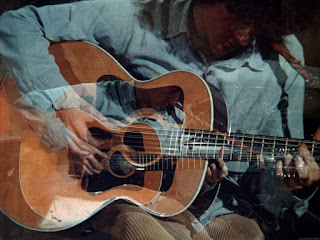 One of rock music's odd little Trivial Pursuit facts is that Tim Buckley premiered 'Song to the Siren' on the last ever episode of the Monkees TV show. The 1968 performance, which was introduced by an off-screen Micky Dolenz, is stripped back, acoustic and in a completely different key to the studio version that finally appeared on the 'Starsailor' LP two years later. Also, in the interim, the line '...puzzled as the oyster' was wisely amended to the altogether stronger '...puzzled as the newborn child'.

It is of course, spellbinding stuff, as indeed was the superb reading by This Mortal Coil in 1983, though there are some that would argue that this Peel Session from 2002 contains the definitive interpretation of Buckley's song.
Posted by The Swede at 07:00

Wow, well I never knew that, I'll try to remember that little nugget!
A fantastic, timeless song. Do you know the version by Susheela Raman too? A friend introduced me to it a few years back and I was most impressed.

Knowing the way his son would leave this mortal coil some 30 years later, it's sort of an epitaph written for the future. An older cousin gave me a huge section of his record collection that included Buckley's Starsailor and Song To The SIren was the only song on it that ever had any impact for me as a teen. When I heard it recorded by This Mortal Coil it didn't register until a few listens that it was that same "cool" folk song I remembered. Rarely does a cover reach the level of the original. That one does.

All the versions you have posted are tremendous.