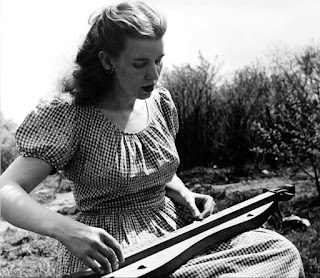 'Jean' was assembled for an Alan Lomax tribute event in 2015 by Steven Collins, working as The Owl Service. The Jean in question is Jean Ritchie, an American folk music singer, songwriter, and Appalachian dulcimer player, who was recorded extensively by Lomax for the Library of Congress in 1949 and 1950. It's her sampled voice that you'll hear entering proceedings at the three minute mark, singing a simple phrase that loops, ebbs and flows to great effect for the remainder of the piece. It's a thing of beauty.

Hi Marie. Hope you are doing well. I have a few Jean Ritchie songs in the collection, but not that one. Many thanks!

New to me and very good indeed.

When I hear something like this, it makes me feel less guilty about spending so much time listening to Mark Kozelek records.

The Owl Service is a great name for a band though, to old Alan Garner fans like me, anyway.