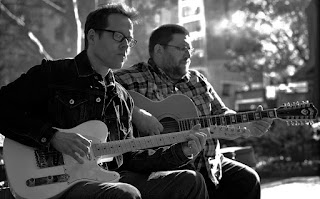 For a number of reasons, I didn't get around to putting a proper 2019 retrospective post together. It might still happen, but just in case time runs away with me as we career headlong into 2020, I'll try to slip in the odd, previously unfeatured favourite from last year as and when I get a chance. Take Elkhorn's 'Sun Cycle' for example. The duo's fourth LP finds their usual acoustic/electric psych-folk sound palette expanded by the addition of percussionist Ryan Jewell (though he doesn't feature on this particular tune) and the additional experimental guitar playing of Willie Lane. 'Sun Cycle' arrived simultaneously with a sister release, the self explanatory 'Elk Jam', an altogether more far out affair, a tune from which might also make an appearance as a Monday Long Song one of these days.

Elkhorn - Song of the Sun

(If you like what you hear, check out the whole album here)
Posted by The Swede at 07:00

Fahey is one of the big influences, that's for sure.