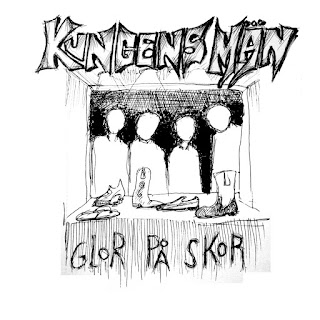 Back in 2013 (seven years ago!), the mighty Kungens Män decided to release an album of downloadable music per month for a whole year, though for reasons best known to themselves, they actually kicked off the series in October, concluding it in September 2014. Therefore January's entry, 'Januari - Kungens Män glor på skor', is actually the 4th volume, but, call me old fashioned, the first month of the new year is where I'm starting!

The title translates as 'The King's men glare at shoes'....and why not? For fellow lovers of improvisational psych, interspersed with all manner of other cosmic influences, I can't recommend the band highly enough and it was one of the true joys of 2019 to finally catch them in concert. Kungens Män released two official LPs last year, as well as music from a bewildering amount of offshoot projects, many of whom have already featured on these pages and all of which are worthy of your further investigation. With barely a pause for breath, there is apparently yet more new music on the way quite soon. My credit card is on standby.

All 48 minutes of 'Kungens Män glor på skor' is available here for a 'name your own price' contribution.

An absolutely wonderful sound which I am indebted to you for putting me on to. All the best Swede.

I think the King's men are actually glaring at the effects pedals those feet in the shoes are using... wow!
Happy New Year, TS.

Happy New Year, Swede. Hoping it's much better than the last one.

This will be our year, Swede!