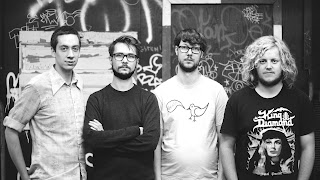 I'm shocked and stunned to note that I've not previously featured the music of Danish quartet Mythic Sunship on these pages. Their brilliantly titled 2018 double LP 'Another Shape of Psychedelic Music' was a big noise, quite literally, at Swede Towers. Indeed, I dug the album out just a few weeks back to annoy the neighbours with it all over again. The band were augmented by saxophonist Søren Skov on the record and he's also in evidence on the forthcoming live set, 'Changing Shapes', featuring performances captured from three shows at the Roadburn Festival in 2019. 'Olympia' is the first taster from 'Changing Shapes' and the magnificent racket of this one tune alone was enough to have me hastily reaching for my credit card. You too can pre-order the album here.

'If Mythic Sunship aren’t the shape of psychedelic music to come, it’s in no small part because there are so few out there who could hope to match what they do.' - The Obelisk

One of my current obsessions are Mythic Sunship. I was not fortunate to get a vinyl copy of Another Shape . . . but do have it on cd didn't make the same mistake with Upheaval and the new one is of course on pre-order.

There are some very good other things on El Paraiso records Kanaan for one who also have a new album out soon.

They are a total fucking trip. Man.

El Paraiso is a fine label indeed. I really like Causa Sui's stuff and The Chicago Odense Ensemble LP was a big favourite of mine from last year.