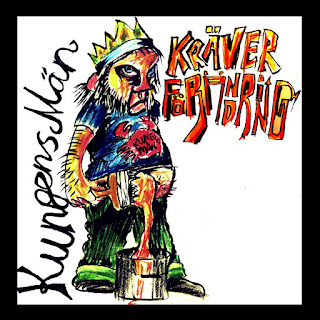 Back in 2013 the mighty Kungens Män (then only a year old) decided to release an album of downloadable music per month for a whole year, though for reasons best known to themselves, they actually kicked off the series in October, concluding it in September 2014. Therefore February's's entry, 'Februari: Kungens Män kräver förändring', is technically the 5th volume, but, call me old fashioned, I started in the logical place, at the beginning of the year!

The title of February's album translates as 'The King's men demand change' and it's crammed with the usual top notch improvised psych that we've come to know and love. Kungens Män released two official LPs in 2019, as well as a slew of additional music from a bewildering amount of offshoot projects, many of whom have already graced these pages and all of which are worthy of your further investigation. With barely a pause for breath, a brand new Kungens Män double LP, 'Trappmusik', will be with us within the week. You can still pre-order a copy here, should you feel so inclined. Fear not though, I shall no doubt be reporting back with my thoughts on the record in due course.

Meanwhile, all 36 minutes of 'Kungens Män kräver förändring' are available here for a 'name your own price' contribution. My favourite tune from it translates as 'Hairy Eyes'.

Kungens Män - Håriga ögon
Posted by The Swede at 07:00

This band are just so so good!

Haha, I'm converting you all gradually - resistance is futile!