While Growing My Hair 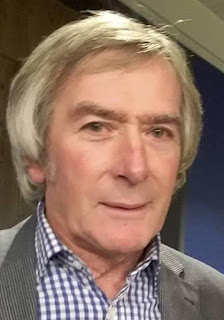 In recent weeks, in spite of all the many real problems facing the World right now, the chatter among colleagues at work has increasingly revolved around our respective, uniquely out of control hairstyles. Grey roots, floppy fringes and impromptu mullets have all gradually become the norm, along with several quite alarming self-inflicted haircuts that initially appear reasonably acceptable when the person concerned is walking towards you, but reveal themselves to be somewhat, erm, inconsistent as they walk away.

I myself have involuntarily cultivated something of a retired 1970s footballer look. More precisely, that of Pat Jennings, a man whose own hairstyle has remained virtually unchanged for over 40 years. With local hairdressers gradually reopening, I'm now debating whether or not to continue letting my hair grow or return to a clipped, spiky normality.

While I consider my options, here's a brief proggy interlude from 1970, a time when both Pat and I gloried in locks that were lush, dark and long.

Keep it going, my man!

As the page slowly unfolded I thought "that bloke The Swde looks a lot like Pat Jennings".
Absolutely love the Egg track. Quintessential prog.

Ah, love this - I kind of want everyone to keep growing it just so we can smile at each other knowingly. Perhaps the '70s footballer look will come round again now and there'll be a time people will be asking for a 'Pat Jennings'?
Having been addicted to having a short 'pixie' crop for some years now, I'm quite enjoying the new sensations that come with washing slightly longer locks (who knew shampoo could lather up so much?) and Mr SDS is looking very rakish now too as his natural waves flourish. It's the one part of this horrible situation which actually feels quite liberating...

Love the Egg track too.

I'm very tempted Brian. A new hairstyle for a new me!

George. I didn't include his name under the photo in my original draft, but thought better of it for the benefit of non 1970s sports fans and/or people who aren't as ancient as me. He's not doing bad for 75 though is he? Glad you dug the tune - I love Egg.

Thanks C. When I was young I absolutely refused to wear my hair above the collar and it was usually much longer, but for the past 25 years or so I've kept it a great deal shorter. It was a very strange sensation to feel the back of my hair rubbing against the top of my collar again after all this time.

Rightly or wrongly I chopped away at mine during lockdown; I'm still here to tell the tale.

C said: "Perhaps the '70s footballer look will come round again now and there'll be a time people will be asking for a 'Pat Jennings'?"
As long as no one asks for a Terry McDermott...
https://www.sc.com/en/feature/about-terry-mcdermott/

Back in my early 20s (a time my daughters refuse to believe actuslly existed!) I wore my hair down to the small of my back. I got it cut to shoulder length to help me get a job when I needed one. It's now much shorter and rapidly thinning. MrsRobster tidied up my straggly bits a ferw weeks ago, but I don't mind the unkempt look. It's more honest and shows I don't spend too much time preening myself in front of a mirror like far too many people do these days!

My wife has cut mine 3 times since lockdown started, clippers on the back and sides and not much off the top. The trick is the blending between the 2 but she's done a good job of it. Makes me wonder why I pay someone else to do it. I cut her mullet off the other day which also went much better than it could have done.

It seems so frivolous for everyone to be talking about hair but has there ever been a time when we've all gone without a haircut for over 4 months. I too thought at first you were sharing a picture of your current "do" but yes, recognise Mr Jennings now. Go for it, leave it longer and see what evolves. Luck has been on my side in that my roots seem to have grown in the same colour as the rest of my hair, which is a first, and down to that old chestnut age. Down to a combination of bleaching by the sun and a touch of grey - I'm going to save a fortune on expensive colouring for a while it seems.

If you'd had curly hair it would have been a picture of '80s Kevin Keegan you'd have been sharing (or Brian May depending on colour).