House We Used to Live In 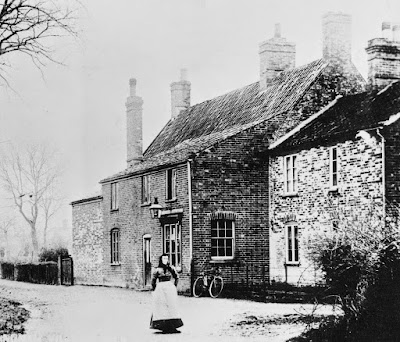 Swede Towers in the 19th Century, when it was the village shop
On Monday, almost nine years to the day since Mrs S & I tipped our final van-load of belongings into Swede Towers at the end of an exhausting series of back and forth trips to and from our rented place in Norwich, I leave this house for the very last time, alone. To say I'm heartbroken really wouldn't come close to describing the state I'm in. I've bounced off these walls in solitude for over a year now, reflecting on the cul-de-sac my life has ended up in and I'm not ashamed to admit that it's proved to be a traumatically difficult period. But, even in my darkest hours, I take great comfort from the 14 years I shared with this remarkable woman and though much diminished by her leaving, I know for certain that I'm a far better person for having known her. 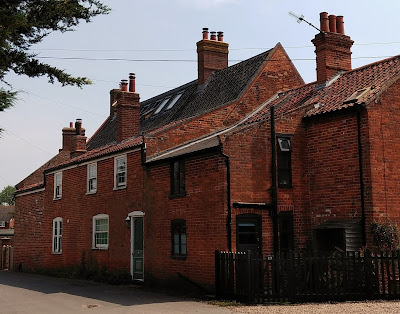 Swede Towers from roughly the same angle in 2019 (ours is the green door where the shop window once was)
Mrs S dropped round a few weeks ago, soon after I accepted the offer on the house, to pick up the last of her outstanding bits and bobs. It was the first time I'd seen her since February. We wound up sitting in the kitchen overlooking the remnants of her amazing garden, nursing our respective cuppas and catching up like old friends do - at one point we reduced each other to breathless tears of laughter following some silly remark or other. In the wake of her visit, I plummeted into a really dreadful emotional place for the following ten days or so. It makes no sense for me to try and keep in touch, or to meet up with her again in the future. I can't see her because I so very much want to see her. So that's the end of it.
If you've made it this far, thank you and I apologise for wallowing in my own dismalia yet again. Going forward, you'll be pleased to hear that it's not something I plan to make a habit of anymore. Our mutual blogging chum Drew offered some simple, yet simultaneously profound advice in the comments a few days ago '...take the good memories of the house with you and forget to pack the ones that are not too good...' Amen to that.
Wish me luck - I'll see you on the other side, as and when I get the broadband sorted in the new gaff.
The Smithereens - House We Used to Live In
Posted by The Swede at 07:00

Can empathise, so yes, all luck to you. Go easy on yourself.

Ah, Swede. Yes, I wish you luck in your new adventure. If and when you hit a rough patch, please reach out. You have many friends here ready to listen.

I count myself lucky that I'm not in your position - I would probably feel the exact same way if I was. So yeah, hold on to the good memories, ditch the bad ones and embrace your new start.

And as Brian says - we're here for you!

I Wish you all für best for the nee chapter you are starting. Don't forget there are many friends out there who are interested how the Story continues.

That can't have been easy to write. It won't always be dark at six. Medd Towers is still only a couple of hours away - don't be a stranger.

(Good use of the word dismalia btw)

Never, ever apologise for sharing how you're feeling in your blog - As everyone else has said you have many virtual (and now real-world) friends around here who are happy to listen. I have been in a similar position, albeit many years ago, but can empathise all the same. It takes time but it does get better trust me. Wonderful pictures of the house, then and now, but time for a new start. All the very best with it all.

As has been said above, this can't have been easy to write, but I do hope it helped you to express it and you express it so perfectly and beautifully. This is a safe place to be so honest and we, as your friends, appreciate your trust in us too.
Thinking of you and sending all positive vibes for the new chapter in your life.

Ah Swede mate, I just welled up reading that. All the best with the move, I hope a new start will do you some good.

A brave piece, The Swede, to share your emotions with the world. (or the 34 regular readers you have!). Yes, keep the good memeories. I think of our house in England with great fondness, its sale enabled us to live this life here in SW Portugal.