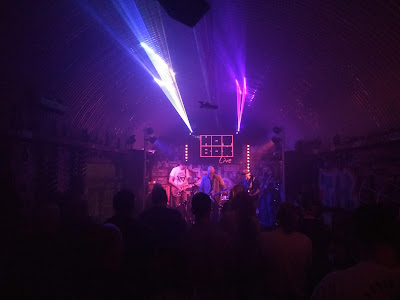 On Friday evening, I did something that in years gone by I would regularly do three or four times per week. Now, doing it just the once was completely exhausting. Where did I ever find the energy back in the day? I'm talking, in case there's any confusion, about making a 150 mile round trip to see a gig. The mighty Kungens Män paid a brief return visit to these shores last week, something I knew that I couldn't miss out on, even though it arrived in the middle of a run of early shifts at work. The band were every bit as dynamic, intense and far-out as the first time I caught them in December 2019, back when the world was a very different place indeed. After that first gig a couple of years ago, I had only a quick chat with the band after their set, so it came as a bit of a surprise at the conclusion this latest show when guitarist Mikael Tuominen came up and greeted me by name. Mikael plays in four bands; Kungens Män, Fanatism, Automatism and Eye Make The Horizon, all of whom are well represented in my record collection, as well as working on his own project Solitär. He also, along with fellow Kungens Män members, has a full time job back in Sweden. He's a busy guy, yet he not only took the time to stop and talk, but remembered my name from that one short meeting two years ago, remarkable.

Friend of the stars! Sounds like it was a great show

Great stuff. I saw Kungens Man back in December 2019 too. Very good gig.

If I was still teaching this track too would be inflicted on classes!

Best band you've ever turned me on too, hands down. Good you could see them live again!

Hopefully they'll return for a longer tour at some point in the future. If that happens, I'll definitely be taking time off work to catch a few dates.

They are coming back again in April apparently