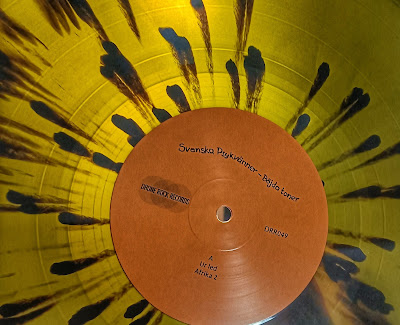 My Instagram feed tells me that a few lucky souls around the world have already received the new Kungens Män LP, 'Kungens Ljud & Bild' (translates as The King's Sound & Vision). Here in the UK however, we're looking at the middle of June before the postman potentially comes-a-knocking with our copies. Fortunately for me (unfortunately for my bank account) the individual members of Kungens Män seem unable to sit still for very long, so almost inevitably there's a cracking recent release from one of their many other musical projects to enjoy while I wait.

Half of Kungens Män constitutes three quarters of Svenska Psykvänner (Swedish Psych Friends), whose debut album 'The Hägersten Sessions' was issued in the Summer of 2019. Their second release, 'Böjda Toner' (Curved Tones), arrived exactly a month ago. Highlights include the 11 minute opening salvo of bubbling motorik that is 'Ur Led' and 'Rökkpgausen', 16 minutes of  prime psychedelic dub, Svenska Psykvänner's tribute to the late great Lee 'Scratch' Perry.

Great stuff Swede. I can't wait to hold their new album in my hands

You and me both Walter! Meanwhile, check out Svenska Psykvänner's albums, which are linked in red.