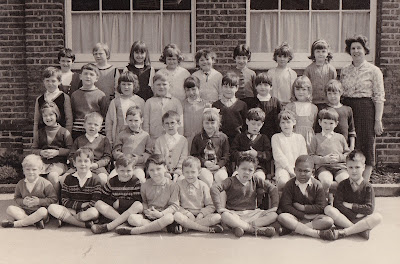 Every now and then, when the whim takes me, I reach into the cupboard and retrieve an album, box or carrier bag full of old family photos to rifle through and usually manage to uncover a snapshot or two that I've either not seen in an eternity or else completely forgotten about - this week's Friday Photo falls firmly into the latter category. It's my first full class photo (up to that point we'd only ever been photographed individually) taken in the playground of my Infants School in May 1967, a couple of months before all us kids went our separate ways, scattered around the Junior schools of Waltham Forest. When I look along the faces of those fidgety children today, I find that I can put names to very few of them, in stark contrast to similar class photos I've found that were taken in Junior school over the next couple of years, where I recognise and remember virtually everyone. I suppose it was all a very long time ago. Anyway, enough of my waffle - would anyone like to hazard a guess as to which of the assembled seven-year-olds above is a young yours truly? I've shared quite a few old snaps over the years, so it shouldn't prove too difficult.

Just over a week ago, our mutual friend John Medd put a shout out for good examples of non-Beach Boys Beach Boys songs. Here's one by The Super Stocks from 1964. To be up front and honest, The Super Stocks were led by writer/producer Gary Usher who actually worked with Brian Wilson & co on a number of occasions back in the day, but that doesn't detract from the fun fun fun of 'School is a Drag'. Incidentally, Usher hedged his bets on this subject by issuing a different version of the same song, also in 1964, under the guise of The Wheel Men entitled 'School is a Gas'.

The Super Stocks - School is a Drag

Third row back, second on the left?

There is a wee boy in the second row who looks as if he's fallen asleep!

In Scotland, we stay in the same class right through Primary School from age 5 to 12 so I would remember their names in a pic but haven't seen any of them for decades. As you say, so long ago.

John: I'm very familiar with Flo & Eddie from their work with T.Rex, but hadn't heard that great track before today. Thanks.

Alyson: Congratulations, you win tonight's star prize, which is a small shandy in an Edinburgh pub of your choice! I particularly like the guy third in from the right on the front row, who has clearly had enough of sitting around and smiling!

Sam had a class photo a few weeks back. When they sent through the proofs I saw they had shot the children in small groups of 4 or 5 and then artily montaged them together. It was hideous and made me long for photos like the one you featured here. Yes, school is a drag. (Like that, btw.)

I struggle to remember people I worked with two years ago so I'm onto a loser with my school day memories. I moved house and school a few times as a kid but I don't remember having any full class photos taken at any point. I think the nearest we got were in costume cast photos for the annual school production and those ones are staying in the box! Thanks for sharing as always, Swede.

Great song too, which I'd not heard before this post.