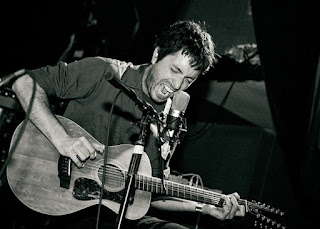 I'm very grateful to our mutual friend and blogfather of this parish, JC, for publishing another of my very occasional Imaginary Compilation Albums over at his place. This one concerns the music of Micah Blue Smaldone, a fairly obscure artist it's true, but one who means an awful lot to me. Check out the ICA here.

By necessity Micah's early retro country-blues recordings were raw, stripped back affairs, though his later albums are darker in tone and fuller in sound. As I mentioned in the ICA post, I saw Micah just once in concert, on a brief 2014 European tour in support of  his fourth and still most recent LP 'The Ring of the Rise'. The album boasts the backing of a full band, but that evening it was just Micah and his 12 string guitar, together completely captivating the pin-drop silent audience. This super-intense performance of 'A Derelict', segueing into the instrumental 'New Orleans Bump', was filmed during the very same European jaunt.

My computer crashed when I tried to leave a comment previously, so here goes again...!

I just wanted to say thanks for the Micah Blue Smaldone ICA and follow up post here. I'd never heard of him before and his music would not obviously have come to my attention without your excellent introduction.

I've listened to the ICA several times over since and really enjoyed it. Great stuff!

Thanks Khayem, that's much appreciated. If you're interested, Micah's 'most recent' two albums are available to stream on his Bandcamp page. They're magnificent, dark beasts. For my money he was artistically just getting into his stride. https://micahbluesmaldone.bandcamp.com/