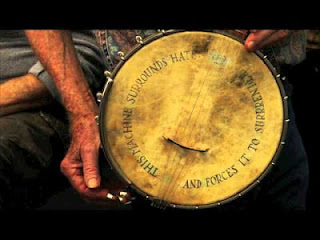 In May 1994 I paid my second ever visit to New York to visit my cousin and her husband. In recent years when a trip to the Big Apple is coming up, I pre-book tickets for gigs or other events of interest online, but in those pre-internet days she would mail me a copy of The Village Voice listings guide to peruse a couple of weeks before I traveled, order any tickets I'd require by phone and I would settle up with her when I arrived. It was all very long-winded, but that was how I found out about an event entitled 'In Their Own Words - A Bunch of Songwriters Sittin' Around Singin''. This was a one evening only event at The Bottom Line, an intimate venue on West 4th Street, taking place bang in the middle of my stay and a show I didn't want to miss.

For my $18 I got to spend a couple of hours in the company of Ted Hawkins, Roger McGuinn, Pete Seeger and Joe South as they sat in a semi-circle on the stage talking about their lives and playing their music acoustically in a very informal setting.

I'd seen Ted Hawkins live in England in 1986 on his first wave of success following radio exposure from Andy Kershaw, but he'd fallen off the radar again quite soon after. By 1994, however, he'd been re-discovered and chatted enthusiastically on stage about his new album on the major label, Geffen, and played us a few songs from it. Tragically, Ted's life was to end seven months later as the result of a stroke aged just 58.

Hawkins played a big part in the evening, but the majority of the New York audience were there for McGuinn, Seeger and South, all of whom played their best known material interspersed with anecdotes and memories. Inevitably, given the location and the parties involved, Bob Dylan loomed large in several of the conversations. Roger recounted the 'give this to McGuinn' story regarding the opening line to 'Ballad of Easy Rider', Pete Seeger explained exactly why he wielded an axe the day Dylan went electric at the Newport Folk Festival in 1965 and, perhaps most fascinating of all, Joe South spoke a little about the Nashville 'Blonde on Blonde' recording sessions in 1966. An unforgettable evening.

Sadly, we lost Joe South in September this year, the same month that Pete Seeger, at the age of 93, released what he has claimed is the first album of all original music he has ever recorded. 'A More Perfect Union' was written and performed with Seeger's long-time friend, stroke survivor and, in his mid-sixties, by comparison a mere youngster, Lorre Wyatt. Guests on the album include Bruce Springsteen, Steve Earle and Emmylou Harris.

'Fields of Harmony', sung by Seeger alone, stood out for me when I chanced upon the album a couple of months ago. The vocal, little more than an abrasive whisper, is almost unbearably moving.

'When my days have been consumed, like smoke
I will lay me down to sleep, in peace
Over fields of harmony , I'll fly.'

Utterly heartbreaking, I'll admit I've never really been a fan of Pete's music, though I respect all he's achieved, but this is quite wonderful. Like a frail Tom Waits.

I feel much the same way about Mr Seeger as you, SB. An important and respected link in the chain, but I couldn't class myself as a huge fan of his music. This song though, is something special.

What a fabulous recolection a night I wish I could have been there. Always thought the 'axe' incident was a thorn in poor old Pete's side. I love the song and must check out the album....I have to say iI am in the SB camp...I appreciate what he has done but it was always take it or leave it....a frail Tom Waits ....I like it.