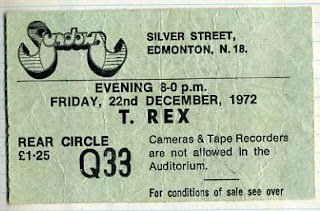 I think I actually wept with joy when I opened the envelope. An early Christmas present from Mum and Dad. I genuinely had no idea, no clue whatsoever that they had purchased three tickets to see T.Rex at the Edmonton Sundown on December 22nd, one for me and one each for my two closest friends, John and George. Before Dad sent off the postal order (for £3.75!!) and all-important stamp addressed envelope, Mum called the parents of my chums in clandestine fashion to OK the whole adventure. None of us had ever been anywhere at night on our own, so it would've taken a bit of planning to get us there and back, even though the venue was only six miles from where I lived. 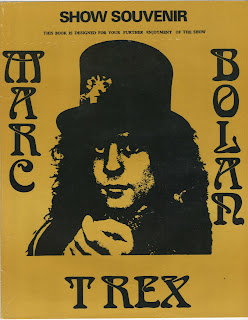 Come the 22nd, Dad rounded us up and drove us to Edmonton. Outside the theatre, there were people everywhere - confused, excited, disoriented young people, much like us. I had no idea what to expect and nothing with which to compare the experience. We had some money, probably given to us by relatives who were in on the secret from the beginning, so while Dad waited, we ran off to buy some of the quality merchandise on offer - a poster, a four page programme, a faux-silk scarf...a plastic pendent..! All good stuff! We threw our haul into the back of the car as Dad repeated, for the zillionth time, where and when we were to be after the show so that he could collect us. Then he was gone and we made our way inside. 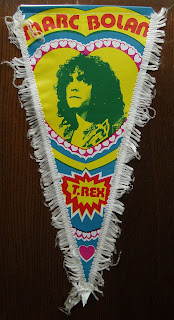 One of the first things I noticed upon taking our seats, was the number of kids my age...accompanied by at least one of their parents! At the time I felt for my peers and was even amused by their predicament, but with hindsight I realise what a big step it must have been for our folks to give us our space and let us go into the gig alone. We were 12 years old, in an unfamiliar environment, with a couple of thousand strangers, in a strange town with no idea how to get home had we needed to. No mobile phones, no GPS, no Oyster cards. (To be continued.) 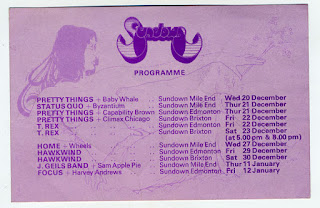 What an amazing experience for one so young - your parents were really good to make it happen! Your keepsakes seem to be extremely well-preserved too...

I admit that I have let some of the souvenirs go over the years (never could find the right spot for that pendent), but, much like a lot of my music nowadays, was sure to preserve them digitally before bidding them a fond farewell.