In 1972, my favourite band didn't have a website on which to promote itself. There were no trending Twitter updates, no video clips on YouTube, no Flickr or Instagram photos to gawp at, no Facebook profile to check, no apps I could consult. No, in 1972, in order to get the hot scoops not available in Sounds, Melody Maker, NME, Record Mirror, Disc, or even Jackie, I had to sit tight and wait. Then, every six to eight weeks, an envelope would drop through the letterbox from the T.Rex Fan-Club with news and exclusive photos, direct, it seemed, from the band's inner circle. 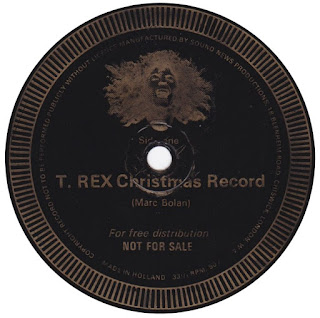 The November/December 1972 newsletter was even more special, containing, as it did, a Christmas flexi-disc, featuring Marc Bolan and the band performing hastily composed seasonal songs and generally larking around. I had no idea that T.Rex were merely continuing a festive pop tradition established by The Beatles in the 1960s - why should I? The Beatles were black and white and gone. T.Rex were in colour and here and now.

I absorbed the newsletter and diligently filed it away, the next one being due towards the end of January 1973. The flexi- disc remained on heavy rotation on my little mono record player, alternating with current single 'Solid Gold Easy Action.' 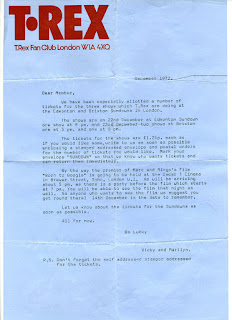 Then one day in early December, quite unexpectedly, another envelope from the fan club dropped onto the door-mat. Inside was one sheet, more of an addendum really, containing up-to-date news about the 'Born to Boogie' movie premiere and a handful of Christmas concerts. I was 12 years of age, these events were outside my sphere of knowledge....and there were no photos! The information was like a foreign language to me, so I quickly went back to my record player. Unknown to me, however, Dad spotted this additional newsletter, noted its contents and put plans in motion to purchase a Christmas present for me that I would never forget.

In my head we saw Born to Boogie and That'll Be The Day within days of each other. Anyway, it was another world, that's for sure. Be lucky.

Now, I was a massive T. Rex fan but I was never in the fan club - hats off to you! I've not heard this Christmas thing before, so it's a delight for me. Always makes me laugh how posh the lad from Stoke Newington made himself sound. How come Bill turned into an American woman? I hope you are going to follow this up with full details of your Dad's surprise.

John, time seemed to crawl at a snail's pace when I was younger, whereas now it hurtles by. The gap between my first musical baby steps in 1972 to first punk gigs in 1977 for example, feels like 15 years rather than 5, yet the 10 years since Strummer died have gone in the blink of an eye.

SB, glad you enjoyed the flexi, it sounds like they had fun making it. Trying hard to finish part 2 at the moment!

That's right, people forget; The Fabs had only split up seven years before the Summer of Punk. If you think how 2005 feels to us now, it's nothing. I really like yoour writing - you carry the torch for Bolan in the same kind of way I do for Connolly. Have a good Christmas, Swede. J x

Thank you John. You never forget your first love do you?

Fabulous stuff...'should be worth a few bob too' but never part with it.