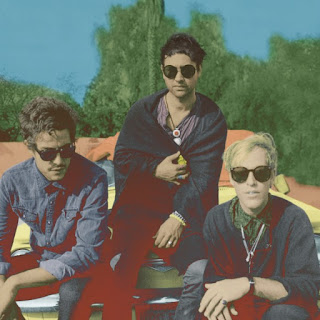 American/New Zealand trio Unknown Mortal Orchestra release their second album, 'II', early in February. If the band is a new name to you - join the club! Thus far, this is the only track I've heard, but I like it a great deal and will certainly be forming an orderly queue for the LP. I presume it must be in their press release, as 'Stevie Wonder producing Plastic Ono Band into Nuggets-like gems' is the phrase that seems to pop up in many online reviews of the band - I'm intrigued and look forward to hearing more.

'Swim and Sleep (Like a Shark)' was originally a tour-only 7" single in September 2012.

Blimey, that guitar figure is lovely - almost like Bach or something similar. Very nice. I'll keep an ear out for more of them.

I like this...will certainly look out for the album

Their first album had some really strong songs, loved that overblown distorted drum soun, especially 'How Can u Love Me More'. I'll look forward to their new stuff.