Most of the day I sit upstairs at my computer, facing the outside wall of my room, with a window to either side of me, overlooking the lane below. For the 15 months we've lived here, a couple of times a day, strolling, casual-as-you-like, out of the driveway to my left comes my pal the pheasant. Phil (as I think of him) walks along the lane from left to right, through the blind spot of the wall, appearing in the window to my right and trotting off into the garden beyond. An hour or so later he'll make the return trip. He's a creature of habit. 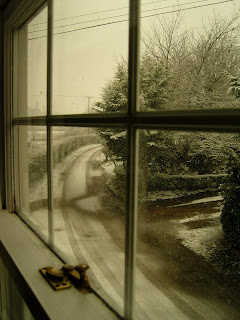 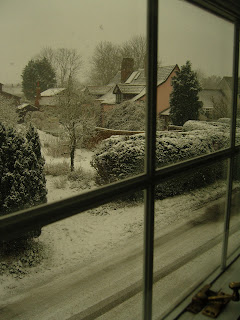 I think pheasants are magnificent birds. Dumb, but magnificent. What I find hard to grasp is why, when we're out walking and a pheasant spots us from two fields away, it will run in panic as if it's very life depends upon it and yet the very same, seemingly cautious bird, will blithely hop out from a hedgerow onto a noisy main road and into the path of many oncoming vehicles and certain death. I can only assume that they associate humans on foot, however innocent and distant, with guns, which often go off around these parts when some of our neighbours indulge in the barbaric slaughter they call sport. Maybe the pheasants are not so dumb after all. 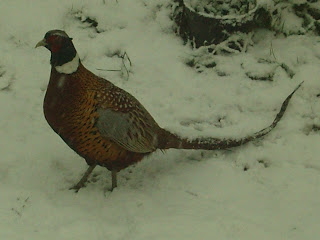 We had a big snow flurry yesterday afternoon and the picturesque views from my windows were an easy distraction from work. As I gazed down onto the lane, along came Phil. Perhaps the wintery aspect confused him, or maybe he was just looking for a little shelter, because he didn't follow his usual path, wandering in circles until he found a suitable hedge to scurry under. I don't blame him, it was icy-icy.

Stay warm Phil and keep your head down.

Brrrr!!! It's getting cold over here, too. Good old, Phil! Long may he run. You have nice view going on there, sir. Been very long time since I listened to The Fiery Furnaces, so that was fun. Keep warm.

What a lovely view from your windows! And I totally agree with you about pheasants... Phil is gorgeous and I hope he lives a long and happy life.
We sometimes get a pheasant in our small garden, but he has to fly in which I always find a pleasure to watch. More often than not though I just hear one, in the neighbour's meadow, that wonderful loud and almost mechanical sounding croak. Mind you, just a few minutes ago I opened the window briefly and heard a fox barking. No doubt a very cold and hungry one - so who knows when I'll next see that pheasant...

Hello! Looks like you've been among the first to get dusted. It looks quite beautiful. Let's hope Phil finds himself a safe warm spot until it's all passed. They are the most beautiful birds, but so utterly pea-brained...

Thanks all for your good wishes. I'll pass them on to Phil when he wanders by tomorrow.

More snow due in the morning. Brrr indeed!

Phil almost made me reach for my bottle of the Famouse Grouse...well its similar