Towards the end of 1984, I and the rest of the staff at the record shop in which we worked, each put together lists of our top 20 favourite 45s and 33s of the year. I recently rediscovered my original handwritten copy and wrote a little about my singles selection here. Today I'll look back at the bottom half of my album top 20. 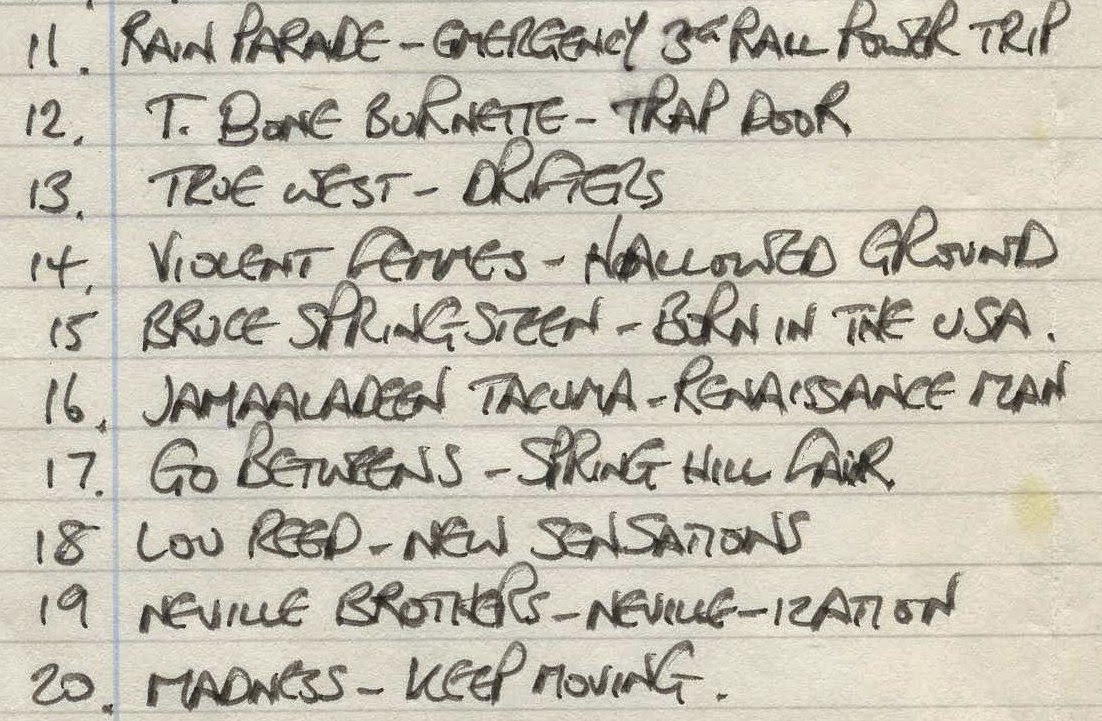 1984 was an ominous year for Madness, with Mike Barson announcing his departure from the ranks. Their music had gradually moved away from the early 'Nutty Boys' sound and I particularly liked (and still like) the darker elements of 'Keep Moving' and its successor 'Mad Not Mad'. 'Neville-ization' by The Neville Brothers was a tight little album, recorded live at Tipitinas two years earlier and pre-dating the band's, Daniel Lanois produced, success. 'New Sensations' is an oft overlooked Lou Reed LP, which, along with 1980's 'Growing Up in Public', I played an awful lot at the time and continue to enjoy.

All of which brings us to The Go-Betweens, a band that I had the opportunity to see in concert more than once, but, for many reasons, never did. A major regret. Here's the much missed G.W.McLennan, with 'Bachelor Kisses'.


I got into Jamaaladeen Tacuma via his recordings with Ornette Coleman in the 1970s and followed his solo career for a while into the 1980s. Unfortunately, while the playing on 'Renaissance Man' is undoubtedly top notch, it's a record that sounds very much of its time and isn't one I can listen to now.

'Born in the USA' also has production values that are very 1984. It was a massive LP in that year and continued to be so in 1985, but although it contains some great songs that I still enjoy in a live context, I don't return to the record very often these days.

In addition to the records I was listening to, my top twenty also reflects the concerts I attended during that period, the next two entries being good examples. I must have seen The Violent Femmes half a dozen times in the 1980s and any one of their first four albums is deserving of your attention. 'Hallowed Ground' is only bettered by 1986's 'The Blind Leading the Naked' in my opinion.

True West weren't around for very long, splitting in 1987, in fact I think I might have even caught the only two London shows they ever played, early in 1985. 'Drifters' is too high in this list. It probably shouldn't have made my top twenty at all. It's a very good LP, but not a great one. It does, however, contain one bona fide corker in 'Look Around'.


'Trap Door' is too high as well. It's another good LP (mini album actually), but not a patch on T Bone Burnett's fantastic self titled LP, which came two years later.

And so to Rain Parade, another live favourite. On my handwritten draft, I've mistakenly written 'Emergency Third Rail Power Trip', their fine LP from the previous year. I must have realised my error though, as I stapled an addendum, 'Explosions in the Glass Palace', to the sheet. This makes more sense. 'Explosions...', another mini-album, was actually released in 1984 and features the Paisley Underground classic, 'No Easy Way Down'.

The Go-Betweens - quite probably the most under valued band ever. 'Spring Hill Fair' finds them at their best.

I agree with you re: Madness - the later, darker stuff is the best. Never was much of a fan of all that Nutty Boys nonsense.

I love the Violent Femmes when they first arrived back in the early 80's but never kept up. Maybe I should have. The songs I've heard form the latter days are always good.

'Born In The USA' - great songs knackered by 80's values.

Oh I loved the Nutty Boys era too!

Brilliant - lots of names from the past there that bring back those mid-80s memories... flicking through those record covers in their plastic sleeves, jangly guitars, 'neo-psychedelia' and intriguing album titles... Loved the Rain Parade but I really didn't like Bruce - you knew that though!

Some more great stuff and brings back some great memories too. I was in Jeddah then and missed out on a lot of stuff. Born to Run was good remember buying it in Nice on vacation. It was good but not as good as earlier stuff.