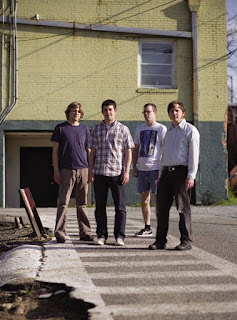 I happened to mention The Kingsbury Manx in a comment I left over at Charity Chic Music the other day. What a fine little band they are. Their sixth LP, 'The Bronze Age', was released in 2013, but the only time I caught them live was way back in 2001 on the New York stop of a US tour they undertook with The New Pornographers - an excellent double bill. The Kingsbury Manx can be a subtle proposition at times and I remember wandering around the hall a bit that evening, in an effort to get away from the chatterers in the audience, not to mention an over zealous Uncle Tupelo fan who wanted me to sell him the t-shirt I happened to be wearing. Anyway, I dug out a couple of Kingsbury Manx albums this afternoon and am happy to confirm that they sound as good as ever. Here are a couple of good 'uns from their self-titled debut of 2000.

Haven't listened to them for years. Thanks for the reminder.

Not familiar, but pretty nice sound....I am sure I have said it before but you should do a book of all the gigs you have been to and yoiur memories of them...ie the guy wanting to buy your shirt.