I'm not sure how I'm going to mark the end of the year on the blog. At the conclusion of 2014 I put together a long, sprawling post looking back over the music of the previous 12 months (it's here if you're interested), though still managed to miss out some absolute corkers. I doubt I'll have time to produce anything quite so elaborate this time round, but while I wait for inspiration to hit, I've been re-listening to some much loved albums of 2015 that, up to now, haven't put in an appearance on these pages. 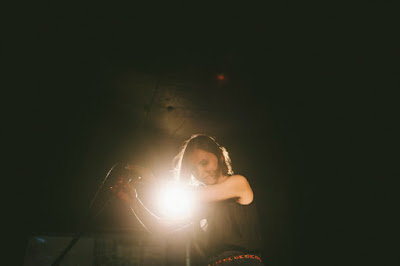 French sound sculptor Cécile Schott, who performs as Colleen, released her sixth LP, 'Captain of None', in the Spring and it's a beautiful thing, full of rhythmic loops and delicately catchy vocal shenanigans. Here's 'Lighthouse', my favourite song from that record, plus a live version, filmed in the Summer, that shows just how she makes those glorious noises.

I'm somewhat alarmed to note that I bought Colleen's first album, 'Everyone Alive Wants Answers', back in 2003 - 12 years ago. 12 years! Aaargh! The spooky 'Ritournelle', from that very record, was the first thing I ever heard by her.

Love the way you describe the music and your reactions to it, Mr. S.

Glad you all enjoyed this one folks. It slipped under the radar a bit and is well worth a revisit.

Wonderful start to whatever kind of summary you decide to do. I know it's a big job. As CC said, 'Lighthouse' is lovely. Will look into Colleen a bit further.

What lovely music. Never heard of her but glad I have now. Will explore further.

That's good to know Brian. I'll have to check out what else they recommend.