Out of the Unknown 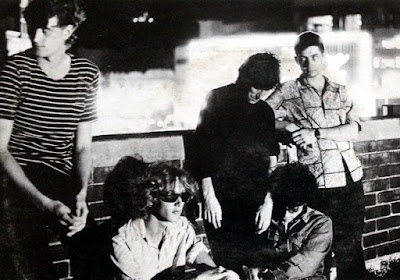 On my regular journeys up and along the A12, A14, A140 and M11 in the 1980's, travelling to concerts in London and the East of England, my one constant companion in the car would be a little portable cassette player. My faithful Vauxhall Viva had a radio, so I could at least listen to Peel when he was on, but otherwise radio programming in those pre-XFM/6Music dark ages could be a grim affair, particularly on the journey home in the wee small hours of the morning. So, with new batteries installed for the trip, I would head out on the highway with a miniature ghetto-blaster (affectionately dubbed the gateau-blaster) and a multi-volume series of carefully crafted, home-made, compilation tapes I dubbed 'Out of the Unknown'. The title, 'Out of the Unknown', derives from the 1984 debut single by Australian band, Died Pretty. The song was never far from my ears, heart or compilations at the time and it remains a stirring psychedelic masterpiece, dominated by Brett Myers' wailing guitar. Terrific stuff.

I caught Died Pretty in concert just once, in a support slot at Brixton Academy in the mid-1990's. I think I was the only non-Australian down at the front for their set. The band were tremendous that night, but, to my disappointment, they didn't play this song. Later still, in 1999, they released a career spanning compilation album entitled 'Out of the Unknown – The Best of Died Pretty', which, though packed with great tunes, bafflingly failed to include the title track! Perhaps by then Died Pretty had grown tired of that great debut single. I never have.

Died Pretty - Out of the Unknown
Posted by The Swede at 07:00

Absolutely with you on this track - vivid memories of first hearing that 12" in the shop, knowing nothing about them apart from them being Australian (and such a good scene going on down there then in particular) - being blown away by it and just having to have it. Still sounds great, a classic.

That is great, never heard it or of them before. Thanks Swede.

I didn't think I'd ever heard of them either but when I played that, it rang a vague bell. I see their old albums are on emusic so I might have to investigate further. (That best of CD you mentioned is going for £50 on Amazon!)

New to me- and really good.

I know these guys from an old comp on Citadel Records called Positively Elizabeth Street. It’s funny. I just looked them up and I see they had albums on a major label throughout the ‘90s... a time period that’s a big hole for me. Guess I have some catching up to do.

C. The Australian scene was so great at that time wasn't it?

Drew. Glad you enjoyed it.

Rol. The first three tracks on 'Pre Deity' are a pretty good place to start.

SA. They were a good band, worthy of further investigation.

Brian. I had that comp too! Yes, Died Pretty were snapped up by Sony for a couple of strong albums, which is how I came to eventually see them supporting Soul Asylum in Brixton. Unsurprisingly, Sony didn't have a clue what to do with the band and they soon returned to their true spiritual home of Citadel.

I remember this. And I remember the Hoodoo Gurus and the track Darlinghurst Confidential by The Celibate Rifles.

A great lesser known 80 song! As you say, the guitar work is impressive. Thanks for sharing

Would love to hear some of these mixes if you have a way to digitize them, and share them here.

George, Chris & Kevin - Thanks for checking out this old favourite of mine.