…i listen to the wind that obliterates my traces 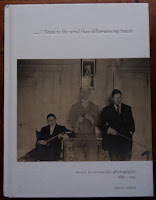 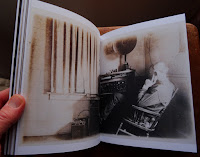 It's been a busy festive period for your old pal The Swede. I've accepted every shift offered to me, worked bloody hard and, it has to be said, enjoyed practically every minute of it. After seven years sat on my backside behind a keyboard, it's been a tonic for body and soul to get out into the real world again. The available hours are tailing off now though and soon I'll be back to just picking up the odd shift here and there, which is much as I suspected it would be, so over the next few days I'll be starting to dip into the many blog posts I've missed while I've been otherwise engaged. Meanwhile, as a reward for all my efforts, I thought I'd treat myself to a very special release that's been high on my wish-list for over five years. 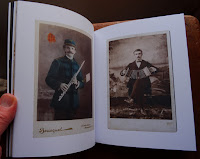 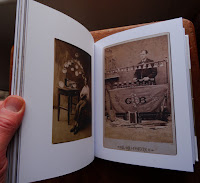 Long term readers will know of my fondness for vintage photos (a daily blog of photos from my own collection, Before the Streets Were Aired, is now into its third year of business) and old-time American music. In 2011, the wonderful Dust to Digital label (think a 21st Century, ever expanding version of Harry Smith's 'Anthology of American Folk Music') issued '… i listen to the wind that obliterates my traces: music in vernacular photographs 1880-1955', a 184 page hardback book which features 150 old photos plus two compact discs containing 51 vintage tracks, all transcribed from 78rpm records (dust to digital, geddit?) recorded between 1925-55. This terrific set was put together by Steve Roden, a man who has trawled the flea markets of America for over 20 years, searching for interesting antique photos and fascinating shellac oddities. It's a true labour of love and the whole package is even better than I dared to imagine it would be. Here are a few peeks inside the book (click any photo to enlarge) and a couple of samples of the music on offer. 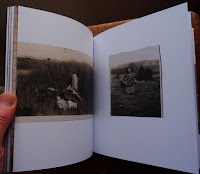 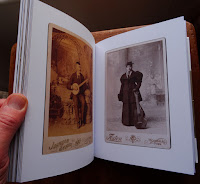 Looks and sounds fascinating, Mr. S! Thanks for the samples - I hadn't heard either before today.

What a wonderful-looking book, some great pics there. I particularly love the one with the guy lying on the grass playing his guitar. That would look grand in a frame and hung on my wall.

The book looks wonderful, right up my street too, and what a great idea to have the music too, to adds another dimension and a true sense of the time. The nearest we can get to time travel I suspect!
Love the last photo of the lady in her big coat with guitar.

Marie. I thought this set would be up your street. You should check out Dust to Digital's catalogue, it's all compiled with such attention to detail and features a huge range of historic music. Not cheap though unfortunately, particularly when you add shipping to the UK into the equation. I already own one other release from the label, which I'll post about one of these days, but I want them all!

TheRobster / C. The photos are incredible, these few just scratch the surface. I'm really pleased with the set. I've waited a long time to splash out on it.

Ha. As I was reading your post I was thinking... C is going to dig this. Glad you could treat yourself to something special. Loving these old-timey tunes.

That's a great title for any book... and the insides look pretty fascinating too.

As one who's dreading my return to the world of work after my Christmas break, I envy your slide back into more leisurely pursuits.

A genuinely heart-warming post. It's great when something you yearn for delivers in such a perfect way.