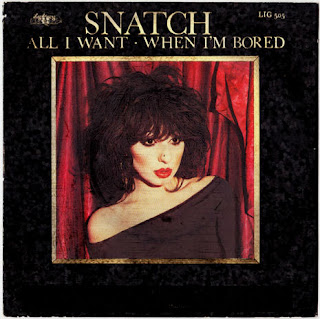 Snatch was a never a band as such, more a UK based collaboration between fellow exiled Americans Patti Palladin and Judy Nylon, which spawned just three singles between 1977 and 1980. In 1983 these tunes were gathered together, along with an appearance on a Brian Eno b-side, 'R.A.F.', and a handful of unreleased demos, to form a posthumous, self-titled compilation LP on the Pandemonium label.

Great forgotten duo. The Thunders-Palladin duets are tasty, too.

I must try and have a listen to this Pal Jody album. Sounds interesting.

Always considered Patti Palladin Punk and Post Punk's Ronnie Spector - that might be too easy, but she sits as high as Ronnie Spector in my estimation. Patti and Thunders made some beautifully tragic music together. Her songs with Judy Nylon were full of feminine experience and very experimental/DIY/No Wave. Black Market is incredible Dub/Punk. Joey is my favorite track.
All I Want is one of those songs all my friends and I would hear around the shops and record stores in Manhattan even a few years after it came out. NYC Punk Rock !
Interesting Six Degrees Of Separation: Bass player on All I Want was one Bruce Douglas who was in Punk/Power Pop band The Reaction who had a great track I Can't Reist. The lead singer of The Reaction was Mark Hollis who a few years later would take his Punk/DIY chops on to deconstruct Rock And Roll In Talk Talk. Sorry I just love stuff like that...

Blimey Echorich, that's fascinating. I had absolutely no idea. Thanks for that.

I would have been 14/15 when this came out and would have loved it....if I'd stumbled across it back in the day!!

Hearing this was like finding a piece of valuable treasure...Thanks so much!