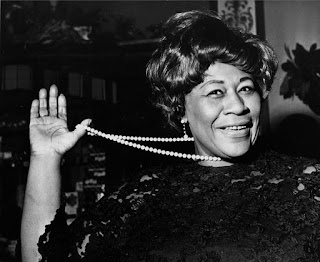 It was good to see so many acknowledgements of Ella Fitzgerald's centenary on April 25th, online and elsewhere. I had intended to post my own humble tribute to the first lady of song last week too, but, as ever, life got in the way. Here it is though, better late than never. In 1969 Ella issued a self-titled, Richard Perry produced  LP on the Reprise label, consisting of her interpretations of contemporary pop songs. Lennon and McCartney were represented by 'Got to Get You Into My Life' alongside the music of Smokey Robinson, Bacharach & David, Randy Newman and Harry Nilsson. George Harrison's odd ode to Eric Clapton's chocolate addiction, 'Savoy Truffle', also got the nod. It's amazing to think that the original was less than a year old when Ella took a run at it.

Ella Fitzgerald - Savoy Truffle
Posted by The Swede at 10:19

Oh, man -- this is awesome! I know it's uncool to be a huge Beatles fan but I cop to it. And anything Ella did is great. Never heard of this before and I'm smiling...

Uncool to be a Beatles fan? Then label me uncool! Glad you dug the tune JTFL. God bless Ella.

Nice acknowledgment for her centenary, an excellent Beatles cover. I almost bought a Fitzgerald boxset when on holiday recently.
As you say, appears to be an anti-chocolate/addiction song, yet the bars are helpful for keeping your energy levels up. Maybe when I start having holes in my teeth I'll be less enthusiastic about chocolate...

Is there a version of the Temptations' 'Get Ready' on that particular LP too, Mr. S? (It's the only other Reprise-era track that I've heard.) Though I think Ella could sing just about anything and could probably even have improved upon a lot of those silly novelty numbers that were hits during the '60s - 'Purple People Eater' comes to mind for some bizarre reason . . .), my favourites are the standards that she recorded.

Chris. You'll have to have them all pulled out after the Savoy truffle!

Marie. 'Get Ready' is on there, 'The Hunter Gets Captured by the Game' too. It was an interesting period for Ella, as she also recorded that killer version of Cream's 'Sunshine of Your Love' the previous year. Great stuff - not sure what her core audience made of it though!

This is actually pretty bloody good. Always going to get a fine vocal, of course, but this sort of genre crossing doesn't always work out well. Nice tribute to the legend.

So glad you put this one together, Swede. Love Ella and the Beatles, and this era of hers is often forgotten. As for JTFL's comment, it may sound bloody ridiculous, but it's out there, that hatred for the lads from Liverpool. Believe it.

Well put! I've encountered some disparaging remarks about our heroes, too.

Singing Bear. I agree. I remember reading about 'Sunshine of Your Love' and wondering how it could possibly work, before eventually tracking it down in the pre-internet days and being blown away.

Brian. It reminds me of a friend who's about 15 years older than I am. His stance has always been 'The Beatles? Good singles band'. There's no swaying him.

I've never heard the original. This is a damned fine song.

I can't find the original on Youtube, but I did find this:

I prefer the EF version

A lot of love around still for Ella and this is a fine song.

I'm off out to get some Lynd chocolate balls and gorge George!