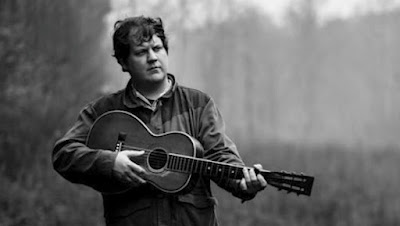 I'm indebted to Ramone666, over at For the Sake of the Song, for persuading me to have another crack at 'What in the Natural World', the 2nd LP by the spectacularly named Jake Xerxes Fussell. William Tyler, a favourite of this parish, was involved in the making of Jake's 2015 self-titled debut and I'd already given both records the once over, but for some reason neither had stuck. Cue Ramone666's memory jogging post a little over a month ago and suddenly bells were ringing and light-bulbs were flashing. I'm not sure how I didn't fall hook, line and sinker for Jake Xerxes Fussell first time round, but I'm more than making up for it now.

'Furniture Man' is a rewritten take on a traditional song - the sad story of a man who's lost everything, even his frying pan. Has such a tragic tale ever been told so gorgeously? Check out more of Jake's music here.

Never heard of him before. A great song between folk and Country. Well done Swede

I love when that happens, Swede. Nice catch. This is nice.

New one on me. Intriguing. Will look out for more.

Love that little guitar in the pic.