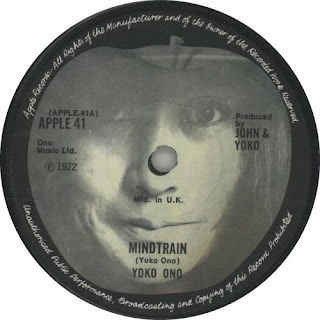 I'm off to see Stewart Lee again next week, for the 6th time in a little over two years and the 3rd time on the current 'Content Provider' tour. In addition to being by far the best stand-up comedian currently working in the UK, Stewart is a massive music fan - in fact on both of the occasions that I've managed to snatch a few words with him, it was music we discussed, not comedy. So you know damn well that when he selects his pre-show and interval playlist, he does so very carefully indeed. On the last tour he had John Coltrane's terrific version of 'My Favourite Things' playing on a perpetual loop, but this time round he's introduced a little Turkish funk to the intermission proceedings....plus one other 17 minute tune that for all the world could be an extended out-take from Neu! or Can. But I cannot tell a lie, it's not a great lost Krautrock track. The chugging riff is in fact the work of ex-fab John Lennon, ably assisted by Klaus Voorman on bass and Jim Keltner on drums - and up front, yes, that's Yoko Ono. The tune is taken from Yoko's 1971 double LP 'Fly' and it's quite an exceptional thing. I'm looking forward to hearing it at full volume again next week.

I sort of accidentally played this. By which I mean that I misread what you wrote, thinking it was on out-take by Can. And it sounds like it is. It is remarkably good.

It's a bit of a tough sell I know. Thanks for giving it a go George and I'm glad you enjoyed it.

I can't imagine what listeners thought of that in 1971. Pretty far out nearly 50 years later. Yoko has had a couple of fine moments. I especially liked Walking on Thin Ice. I'll even go on record that I have liked a couple of Sean's albums.

I agree Brian, Some of Yoko's music may not be for everyone, but she has had some undeniably fine moments.

That was pretty nice until Yoko started gargling.

Stewart Lee, though, you can't go wrong with.

I was anticipating receiving even less feedback for this tune than I get for my occasional jazz posts, but I've been pleasantly surprised! Thanks for checking it out Rol.