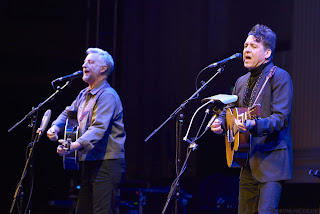 The doors had only been open for 30 minutes on Tuesday evening and many people were still filing into the venue when Billy Bragg and Joe Henry walked unannounced onto the stage at bang-on 8pm. The pair launched into a strong six song selection from their recent collaborative LP of great American railway songs, 'Shine a Light', each one being individually set into context by either Billy or Joe. After concluding their opening segment with a version of Gordon Lightfoot's 'Early Morning Rain', Billy took his leave and left Joe alone in the spotlight, to perform a five song solo set. Some of the audience around me became a little restless during Bragg's absence and following Joe's first song, 'Trampoline', the chap next to me lent over and idly asked what I'd thought of the show so far. I told him that though I'd been lucky enough to see Billy Bragg many times in my life, I'd waited 21 years to see Joe Henry sing 'Trampoline' and it had absolutely made my night. He admitted that he'd never heard of Joe Henry before the present collaboration and looked at me gobsmacked. To my surprise this memorable performance wasn't even the highlight of Joe's set. That came with a cover, 'Freedom For the Stallion', proceeded by a moving tribute to his great friend Allen Toussaint who died in 2015. Here's an audience recording of the same song from last year.


After a short intermission, it was Billy Bragg's turn to sing a few of his own songs, including two brand new compositions. One, 'The Times They Are A-Changin'...Back', is unlikely to be formally recorded, but I can see it becoming a constantly re-written and updated staple of Billy's set for the foreseeable futre. The other, which may or may not be called 'The Dreams of Reason', is an equally powerful work in progress - just five days old on Tuesday. Following Billy's well received solo set, he was rejoined by Joe for more from 'Shine a Light' plus a fine cover of Dylan's 'Tonight I'll Be Staying Here With You' during the encore. An excellent night.

What a night! I'll third that.

The quote of the night came from Joe Henry, while discussing the divisive effect of Trump's extreme rhetoric in America. 'This is where we are, not who we are'.

I couldn't get into the album - not enough Billy. It felt like he was a backing vocalist on a lot of the songs and I was expecting something more in the vein of the Wilco collaborations. That said, live, he always delivers, and I imagine I would appreciate the songs more that way. So, yes, count me jealous too.

Bloody couldn't go on Thursday night in Glasgow, due to 22:00 kick off time of the gig combined with a very early rise. My mate texted to rub salt into the wounds by telling me just how good they were.

Rol. You nailed it. I found the concept and documentary more interesting than the actual record, though several of the tunes were significantly better in a live context, with the added benefit of the background to each one being provided by the performers. Additionally, because of current world events, there was a palpable frisson in the air, both men were equal parts eloquent and furious. It really was a great evening. (Sorry Drew).

Fabulous post TS have not heard much of Joe but loved the Stallion track. As for the Bard that was great too. I wonder what Bob thinks, I think Billy has stolen the idea. It is somthing as you say is there to be update at any time. You missed a trick there Bob.