All That Jazz #1 - Herbie Hancock 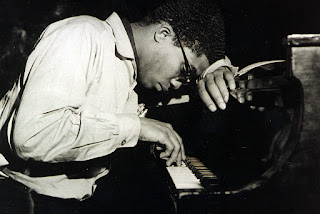 For a long time, a very long time, I've wanted to introduce a Jazz series to these pages. I'm keenly aware that this might prove less than popular in some quarters and I can respect that, but it's a musical genre that takes up a great deal of my listening hours, so please forgive an old man's indulgence. Fear not though, the series, much like its Reggae counterpart Red Gold & Green, will be an occasional one. The title, All That Jazz, is a nod to my Dad (himself a Jazz fan in the 1950's) who would often, apropos of nothing, conclude a sentence with the phrase '...and all that jazz'.

I'll kick things off with the nearest thing to a safe bet that I have at my disposal, 'Cantaloupe Island' by Herbie Hancock. The tune was recorded in 1964 for Hancock's fourth Blue Note LP 'Empyrean Isles', on which he is joined by three musicians who will definitely reappear in this series down the line somewhere - Freddie Hubbard on cornet, Ron Carter on bass and the great Tony Williams on drums. The tune achieved renewed recognition when it was heavily sampled to form the basis of 'Cantaloop (Flip Fantasia)', a hit single for Us3 in 1993.

(Buy 'Empyrean Isles' by Herbie Hancock here)
Posted by The Swede at 07:00

Bring on the jazz!

I am looking forward to what will be next in this series, Swede.

Charity Chic. Not a problem at all - please tell Mrs CC she's more than welcome to drop by though!

Walter. Thanks - I hope you find something to your taste along the way.

Nice one and a good start to your new series. Best of luck putting it across!

Since starting my blog it has been a revelation that it is not indeed the 70s and 80s material I have enjoyed revisiting most but the 60s - for all sorts of reasons. Love this and reminds me of scenes in early sixties movies which I also love. Will definitely be dropping by this series.

But please don't call yourself an old man - I have recently worked out that we must be of the same age and that would make me an old woman! Like the reference to your dad as well. It's amazing how often little things like phrases or idioms they used crop up when thinking of older music - all part of family life.

Jazz is not really my cup of tea either but I have just come back from a leisurely lunch with some old friends in a very easygoing but classy venue and have to say that the jazz soundtrack which accompanied us through our gorgeous meal was absolutely right and I rather enjoyed it. Seems that more than a few of us had parents who were into jazz as same goes for me - my mum being arty and a bit of a free spirit certainly loved going to 'Jazz Club' ("niiice") nights at our local venue (some nights a jazz band played in the bar while a punk band played in the hall, I tried not to cross paths with her!)
So whilst jazz is not my thing, I must say that this track is an exception for me because it has that whole laid-back, low-lit, smoky bar atmosphere oozing out of it, really rather sexy. (Maybe your new series will throw up other exceptions too, who knows?!) And although you've explained about the Us3 hit I still feel sure that I know it from somewhere else. Racking my brains to think of where... an advert? A film?

Alyson. Thanks for checking out the tune. The body may be crumbling, but I like to think that I have young ears!

C. Dad used to go to Jazz clubs in Soho in the early 1950's, before he was married. I wish I'd asked him more about those days. I'm glad you enjoyed the tune. I can't promise that they'll all be to your taste (I've got a few slightly more radical selections lined up for the future), but hopefully there'll be one or two that will appeal. 'Cantaloupe Island' is a bit of a classic and has been covered several times. I wouldn't be at all surprised to find that it has also cropped up in a film soundtrack or on an advert or two.

You could link each one to a 30 minute playlist. This one could be Hancock's Half Hour. I'll get my coat.

Was going to make a Fast Show reference but C's already done it.

I'm far from an aficionado, but I do have a couple of Hancock albums from his Blue Note days I like a lot, particularly Takin' Off from 1962. Bop at its best. I'm really gonna dig this series.

I'm not a jazz expert. The Essential Miles Davis is as far as I got, although I look forward to what you have to say/share in the new series.