In her final years, as her frailty and ill heath became gradually more pronounced, my Nan would quite often grab my arm for support, pull me close and whisper in despair - 'Don't ever get old'. I remember it distinctly. I also remember shaking my head at the absurdity of the very notion. I was young - I wasn't ever going to get old. Nan was living with us by then, as was her Sister-in-law, always known to me as Aunt Maud. Aunt Maud bore her own old age in a more stoic fashion than Nan. She laughed a lot, she enjoyed a drink and a cigarette and was generally the more sociable of the two, in spite of her increasing deafness and having been registered as blind for most of the second half of her life. As I went through a growth spurt in my mid-teens and shot up past them both, Aunt Maud, a Cockney through and through, would peer up at me as best she could and exclaim, 'Blimey, I reckon I'm growing downwards!' 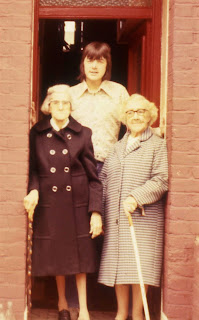 It would appear however, regardless of my very best efforts over the intervening 40 odd years, that I am in fact getting old. Or at least old enough to qualify for a recent invitation to our local medical centre, to have a general health and well-being check. Questions were asked, blood was drawn and readings measured. I'm doing ok apparently - BMI, weight, heart, pulse, cholesterol and blood sugar all tickety-boo. 'One last thing...' said the nurse as I was about to leave, '...step over here and we'll check your height.' 'Six foot six, I chimed confidently - I'd already told her as much, earlier in the examination. The nurse stood on tiptoe for a moment to adjust the measure so that it rested lightly on top of my head. 'Six foot four actually' she countered with a smile. 'Blimey,' I said. 'I reckon I'm growing downwards'.

REM - Feeling Gravity's Pull
Posted by The Swede at 07:00

Great photo. I think most of us of a similar age to you towered over our grannies.

My nephews are now towering over me!

Lovely post and fab photo - I just hope I'll be looking as dapper as those two ladies when I get to their age.
To lose two inches, though, must've come as quite a shock. Are you sure it isn't that you just used to measure your height in your stack-heeled shoes?

Charity Chic. There have been very few times in my life when anyone towered over me!

C. Haha, you could be right there, though I put my alleged reduction in height down to bad posture and general slouching - I demand a recount!

All my grandparents ended up shorter that me in the end (and I'm not that tall) - Another of the unexpected consequences of living to a ripe old age, but better than the alternative. Like C, I suspect it was your platform soled shoes that must have made all the difference (or did you not go down that route in the 70s?). Great picture.

Great pic, Swede. If not for the fact I'm 5'8" I would feel badly for you. Always liked this song, and now I'll think of this story whenever I hear it.

A much under rated REM song. Great post too

You'd have made a great Lieutenant Pigeon tribute band.

Very nice post - I've got to check my height on the upcoming check as well.

Ah... so I may have to soon compile you a Top Ten Songs For Short People?

Randy Newman at Number One?