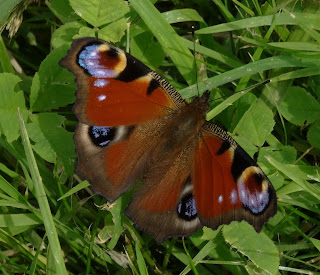 All my own work!

Among the ever increasing list of accidental omissions from in my recent end of year posts is 'Ceremonial' by Anchorsong, which was issued so early in 2016 that I became convinced it had actually been released in 2015. Schoolboy error. The LP, on the Tru Thoughts label, is oozing with beautifully realised cross-cultural pop tunes. Look out - here comes one now. (If you like it, there's more here)

Anchorsong - Butterflies
Posted by The Swede at 07:00

Lovely photo of the peacock.
I'd love to see a video of dozens of butterflies fluttering about with this as a soundtrack - I'm being a bit obvious and literal but the 'twinkly' sounds in particular make me think of the delicacy of their movements.
(Sorry, posted similar comment earlier, then on reading back it sounded like I thought the *music* was obvious and literal - but I didn't, I meant me, not the track!)

Thanks for looking guys - glad you liked the shot.