Charity Chic caused a good natured kerfuffle last weekend, when he posted a pretty shocking cover of 'Wichita Lineman' by Smokey Robinson & the Miracles (check out the grizzly evidence here). All is well in the world once again though, following yesterday's post, which featured a brace of Jimmy Webb penned classics performed by Glen Campbell himself (here).

Many, many years ago, a friend who worked in local radio let it slip that he was due to interview Glen Campbell later that week. The next time I bumped into my chum, I 'coincidentally' happened to have a couple of Glen's singles from my own collection tucked under my arm. My mate took the hint and managed to get the labels signed for me after the interview. Unfortunately, Glen was under the impression that the records actually belonged to my pal, making the dedication out to him instead of me. No matter really, I'm well pleased to have them. 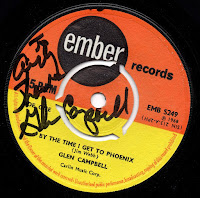 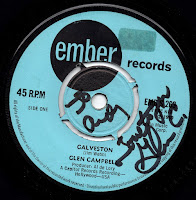 I always though that Roy Orbison should've had a crack at 'By the Time I Get to Phoenix'. Here though are The Mad Lads from the Summer of 1969 with their soulful take on the song. The single, on Stax subsidiary Volt, was produced by Al Jackson of the MG's and proved to be the group's final hit. Check out those moves.

Signed Glen singles? Oh my...I'm green. I missed the posts at cc's place, so will hot foot it over there. Those blokes had all the right moves!!! All groups should HAVE to incorporate dance routines into their act - I'm starting a petition.

I like this footage of the Mad Lads. Can't help but notice the middle backup singer seems to be out of step with his peers and is often blocked by his flankers. It's kind of funny.

Marie. Thanks Marie. I only discovered this clip myself quite recently.