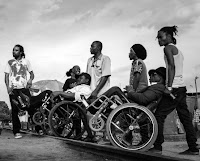 Great stuff, Swede. It's a great album and I wish I could say I'd seen them on this tour as they can obviously cut it live.

As Jamie said - great stuff. I really liked From Kinshasa and played them often. Hope they come to Germany at my place to watch them live.

Great stuff - another one for the ever growing list

Interesting, infectious...there must be a place on the Olympic chair football team too!