An Ear Inflamed On My Dog Chain 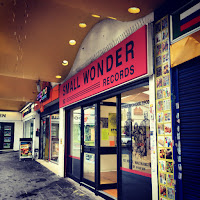 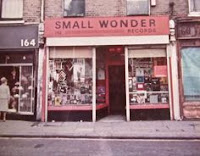 After leaving the British Library, I jumped onto a Victoria Line train at Kings Cross and took myself over to Walthamstow, where, in an empty unit at the top of the High Street (just a couple of hundred yards from its original location), a mock up of the old Small Wonder record shop frontage has been created as part of the Punk Waltham Forest series of events. Stepping inside revealed a virtual continuation of the Punk 1976-78 exhibit I'd visited an hour earlier, with displays of flyers, posters, photos, sleeves and other memorabilia relating to Pete Stennett's hugely important shop and record label. While browsing the collection I fell into easy conversation with two other visitors of a similar vintage to myself, who had dropped in on their way to the British Library's exhibit. We sat for a while and exchanged our individual memories of the punk and post-punk years in general and Small Wonder in particular. It turned out that in spite of having been loyal mail-order customers in the late 70s and early 80s, neither had ever been to Walthamstow before in their lives. After half an hour or so, we all shook hands and went our separate ways, they on to the British Library and me off down memory lane, because unlike them I know Walthamstow very well, or at least I used to - I spent the first 15 years of my life in the place.

My family moved out of London in 1975, one year before Small Wonder opened, though initially I returned regularly, to visit friends and also to buy records from Pete. The last time I crossed Small Wonder's threshold was probably late 1981, a couple of years before it closed down. Gradually my trips to Walthamstow became less frequent, until they stopped altogether - in fact before last Monday, I hadn't walked around the old home town in over 30 years. 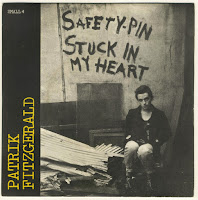 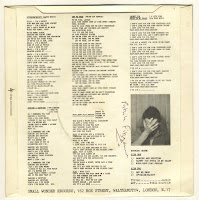 One bitterly cold winter day in early 1978, I dropped into Small Wonder and, after a bit of a rummage through the racks, approached the counter with a couple of singles. Pete smiled at one of my purchases and paused as he was about to drop it into a bag. 'Do want him to sign it?' he asked, gesturing to a shivering figure sitting on the floor next to an old two bar electric fire. The record in question was 'Safety Pin Stuck in My Heart' and the man trying to warm himself was Patrik Fitzgerald.

Oh how special. Just like the two people you met there I also bought many an item mail order, when you used to ring up and speak to Pete, yet never visited the premises. It still always seemed so personal, though! Patrik must've been chuffed to witness you buying his single that day. I was fortunate enough to see him once, performing in a funny old upstairs venue at a hotel in my home town - a bit later on in his career (around early 1981 I think) - where he endeared himself to a small but very appreciative crowd.

I've never seen Patrik in concert. He's still out there playing though, so my chance might yet come.