The Triffids at Islington Assembly Hall 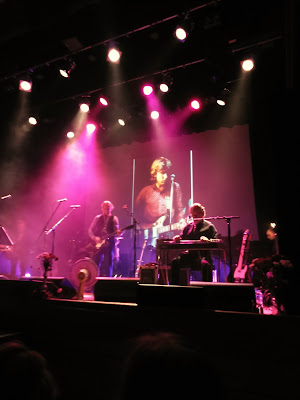 In April 2010, 11 years after David McComb's tragic early death, the surviving members of The Triffids reconvened for a concert at The Barbican to salute their fallen leader. In spite of my best efforts I was unable to make it that night, but asked a friend who was going to text me his thoughts after the show. At around 11.05 that evening his three word review came through - 'Grown men wept'.

In Islington on Friday evening, The Triffids reunited once again, this time to commemorate the 30th anniversary of 'Born Sandy Devotional'. '...it's the best thing we’ve ever done, there's no question about it...' said McComb of the album soon after its original release. The core line-up of the band was bolstered by the great Chris Abrahams from The Necks on keyboards, with Rob Snarski (from The Blackeyed Susans), JP Shilo, Simon Breed and Toby Martin sharing the vocal duties. This time around, in spite of my current lack of a car, I made it to the show - a full 27 years since I last saw The Triffids in concert. It was akin to a reunion with old friends. And yes, grown men wept.

(A couple of years ago, I wrote a little about my history with The Triffids here)


(Recorded a couple of nights earlier in Amsterdam)
Posted by The Swede at 07:00

Bought the reissue of BSD a few years ago. Need to dig it out.
Swiss Adam

The Triffids had absolutely no impact here in America. Made me love them all the more. Felt like they were all mine. One of those bands that seem to be getting their due now though. Well deserved. First time I read that old post you linked to. Found it really touching. Well done, Swede.