On Saturday, the Norwich Sound & Vision festival put on a series of interviews with three punk and post-punk legends. First up, Viv Albertine was quizzed by musician and journalist John Robb, who teased a fascinating series of anecdotes and memories from her. She talked frankly about The Slits, her 'lost' years, the cancer that so debilitated her and her artistic rebirth via the 'Vermilion Border' LP and essential memoir, 'Clothes, Clothes, Clothes. Music, Music, Music. Boys, Boys, Boys'.

Next, Rat Scabies was interrogated by close friend Christopher Dawes. Rat discussed his Damned (and pre-Damned) career, spoke very fondly of Marc Bolan ('...he would've produced the next Damned album...') and chillingly about how close he came to drumming for his friends the Eagles of Death Metal at Le Bataclan last November, hinting at the great trauma the band continues to struggle with following the tragic events at the concert. Dawes and Scabies also talked at some length about their other shared passion, as detailed in their co-authored book 'Rat Scabies and The Holy Grail'. 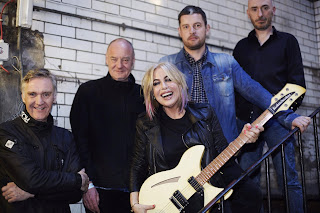 Finally, Brix Smith took to the stage for a Q & A hosted by Adam Buxton. Brix has had quite a life - one minute living in a Prestwich mid-terrace with Mark E Smith in the creative eye of the chaotic storm of The Fall, the next hobnobbing with royalty and football millionaires on the arm of Nigel Kennedy. More recently she's suffered a breakdown, which happily seems to be behind her now. As the interview drew to a close, Buxton invited questions from the audience. I stuck my hand up and asked Brix to talk a little about The Adult Net, her on/off side project during the Fall period. The Adult Net lasted for the best part of five years, though produced relatively little music, one LP and a few singles, but I loved them then and still do. Brix appeared chuffed at my question and gave a proud rundown of the various line-ups, which at different times included members of The Fall, The Smiths and Blondie. She also took this opportunity to remind everyone that releases are imminent from her new band, Brix & The Extricated. The group (featuring fellow ex-Fall stalwarts Steve and Paul Hanley) recently played a blinding session for Marc Riley - I'm looking forward to the new material already. Meanwhile, here are a couple of Adult Net corkers.

Addendum.... I should also mention that Brix's recently published memoir, 'The Rise, The Fall, And The Rise', was warmly recommended by Buxton as a 'rollocking page-turner'. It's on my list.

The Adult Net - Take Me

It was a fine way to spend a few hours. Plenty of scurrilous tales!