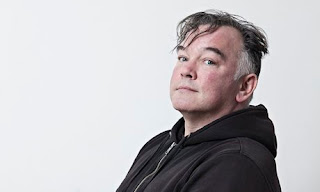 'I'm post-laughter' says Stewart Lee. Expanding on this statement, he imagines an audience member's conversation the morning after the show. 'Did you see that Stewart Lee last night?' 'Yes I did.' 'What did you think of him?' 'Well, I didn't laugh much, but I agreed the fuck out of him.' In reality, on Saturday night in downtown Aldeburgh there was no shortage of laughter. He had the entire audience in stitches from his opening few lines, during the course of which he described the beautiful Suffolk coastal town, in typically deadpan style, as a 'white supremacist fishing village'. I laughed so hard that at one point I seriously thought I'd pulled a muscle in my chest. In the seat behind me, another man laughed equally loud and long. It was Alexi Sayle - and he knows a thing or two about stand-up comedy.

The performance was billed as a work in progress, which essentially gives Lee carte blanche to read freshly written material straight from the page when necessary, as he fine tunes his new touring show. He explained that trialling new material in the age of mobile phones and YouTube is usually a fraught process, but in Aldeburgh he was confident that being so far from civilisation, no word would ever reach the outside world. The new tour, 'Content Provider', begins in earnest in November and will continue throughout 2017 and into early 2018. On Saturday evening he talked (amongst other things) about Brexit, Game of Thrones, Bake Off and the differences between folk sex and jazz sex - some or none of these topics might make it to the finished show. I've already got my 'Content Provider' ticket booked for February, so I'll let you know.

Here's a recent Quietus interview with Stewart Lee, where he talks at length about writing, performing and being a music fan in the 21st Century. Even if you don't like his stand-up, he's a fascinating bloke and this is well worth a listen.

This man is my comedy hero. Going to see him in one of the Liverpool try-outs next month and cannot wait.

I can't see you being disappointed Mark.

Stewart Lee is my favourite comedian and I've seen him live more than any other, though not for a few years. To be honest, I found he pushed the envelope a little too much on his last TV show. A couple of episodes towards the end of the run, I could admire what he was doing but I didn't find it funny anymore. It almost felt self-destructive, like he was seeing how far he could push it before the BBC canned his show. And indeed, that's what happened.

I've not given up on him by any means, and the new stuff you describe sounds more like the comedian I loved rather than just pushing one gag to its unpleasantly confrontational extreme.

Rol, having read Stew's Content Provider book last month I can categorically state that the man himself claims he now approaches any and all work in a self destructive, 'let's see if I can get sacked' manner.

Personally, I feel that Stewart's style of delivery is better suited to a full 1½-2 hour performance, which is what 'Content Provider' will be. The TV show format limited him to half hour bursts (less than that in reality), some of which worked more successfully than others. I saw several dates on his previous tour as he worked up half hour segments of material for the last TV series and lots of good stuff didn't make it on screen for one reason or another.

I want to read Content Provider as his last book was excellent.

Towards the end, the bits I was enjoying the most were the interview drop-ins with Chris Morris.

Towards the end, the bits I was enjoying the most were the interview drop-ins with Chris Morris.

I want to read Content Provider as his last book was excellent.

I'm happy to report folk/jazz and the sexual intercourse thereof, along with Game of Thrones, was still in evidence at Liverpool last night. My throat is scratchy from so much laughter!

Thanks for the update Mark. I'm looking forward to February.