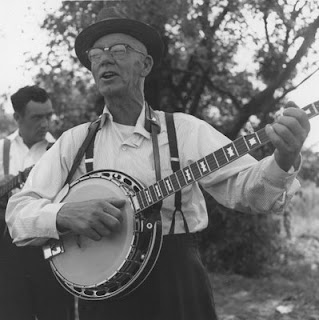 Clarence Ashley - Walking Boss
Posted by The Swede at 07:00

Clarence Ashley, Roscoe Holcomb, Dock Boggs et al - I could listen to them all day Ramone666.

Hope you scored some points with your new boss coming in like that. Fabulous tune, my man.

Like that. Lovely bit of banjo (or one of its cousins). As someone who regularly drags himself into work while under the weather, you get my respect, Swede. Although the main reason I have is that the other half works from home and hates me being under the feet.

Very apt song for your situation - great banjo playing. Glad you're feeling better but dedication to the cause indeed. I have been known to drag myself into work with a heavy cold only to eventually throw in the towel and then return to find no-one there, as I've passed it on to everyone else!

A true trooper! I'm sure your stoicism was hugely appreciated and very glad to know you're better now.
Like the banjo in here too.

This is very new to me and I really like it. These timeless tunes should be featured more. Seems I have to investigate more of them during the next days. Thank you Swede.