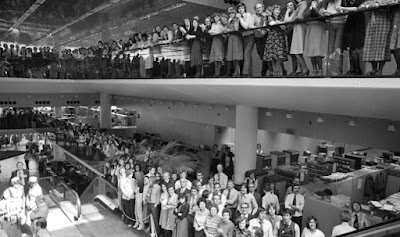 Haha, that must have been a surprise to see in the paper! What a place to start your working life, too.... a bit different from record shops with green walls!
This is better than Where's Wally? - and is that you, on the ground floor, towards the bottom right area of the photo, standing tall behind an older man with glasses, and there's another older man with glasses behind you? (You're all in front of that large pillar.)

I'll leave it to C to ID you, but I'm guessing the building was the Norman Foster-designed Willis building?

I think you're in the bottom right hand corner, behind the filing cabinet, with your head down on a desk, having a snooze.

I'm with C as you've mentioned before that you went to your first punk concert sporting a moustache!

Going to agree with C. Not sure I would have found you, but her direction seemingly shined a spotlight on the suspect. Anyway, you weren't in the obits or the police blotter sections of the paper. So, you've got that going for you. This building looks strikingly similar to the newsroom I worked at in my early years.

Balcony, white shirt, by the pillar, next to Lady Di

I suppose CC is right. You might be the one close to the princess;-))

C nailed the culprit straight away! Curse those darned moustache years! She also mentioned green walls in passing, which makes me wish that this photo was in colour, as believe it or not, the building's carpet was green and the walls bright yellow! I had many-a hangover in those days - I'm not sure how I coped. I must've kept my shades on!
You're quite right Martin, it's the Willis building - well spotted, bonus points for you! In those days the company was known as Willis Faber & Dumas.
Thanks for playing along folks.

I had an inkling!
It's a great looking building, but I think I like the idea of it more in monochrome...