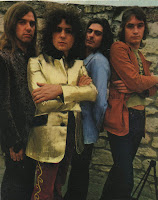 Gosh 40 years ago - Will pop over to read your ICA post. He made a massive impact on you obviously.

I remember Metal Guru above all other T Rex records as it was toping the charts when I and a few hundred other kids from Scotland were at a school camp "down south" - We pestered the teachers to let us watch ToTP which thankfully they did but one small black and while telly and a few hundred kids - Changed days!

First time I've ever heard the demo...it's rather splendid all told. Certainly doesn't sound its age....which I sometimes think is the case with the completed version which wears its glam roots firmly on its sleeve (as it should)