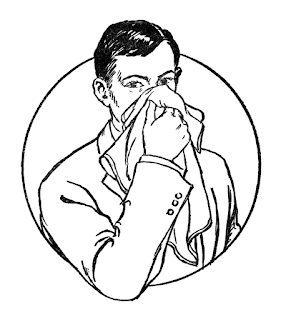 I honestly don't know where it all comes from. Just over a week ago a 72 hour bug temporarily knocked the stuffing out of me, but thankfully galloped through my system so quickly that I didn't really have much time to think about it. However, ten days later and feeling in otherwise fine fettle (and with apologies for over-sharing), my head is still a phlegm making machine. The throat rattles & wheezes and the nose is a constant (and I mean constant) pouring stream. No matter how often I blow my schnoz, it just keeps on coming.

I do hope I haven't put you off your breakfast.

Given all this unpleasantness, there is only one tune from my collection that truly fits the bill today. I picked up 'Harcourt', a Pehr compilation, from a long-gone Greenwich Village record store in 2002. At the time, Pehr specialised in the kind of dark post-rock I was particularly partial to, but I'd heard of none of the acts on this cheap sampler. 'Lunarcy' by French four piece Phlegm is the standout and quickly became a favourite of myself and Mrs S. The tune is taken from a split 12" EP, 'Phlegm / Telemak', their only release, a physical copy of which took me a further ten years to track down. The full EP is now available on Bandcamp if you're interested, though given the sometimes graphic nature of this post, perhaps you'll never want to think about Phlegm again.

That explains it. I visited your blog the other day, and I now have the same symptoms. Obviously very catchy... just like this song.

Could it be hayfever, d'you think? Really bad this year and affecting lots of people for the first time, apparently - a bad combination of factors in the atmosphere! Whatever, really hope you're feeling better soon.

Since writing this, my condition has been upgraded from '...otherwise fine fettle' to 'pretty ropey actually'. I've never knowingly suffered with hayfever before C, but you could be right.

C has beaten me to it but was just thinking myself that it could be hayfever - All this hot weather is causing a bumper haze of pollen. Hope it passes soon but maybe try some medication in case?