If You're Alone and You Got the Shakes 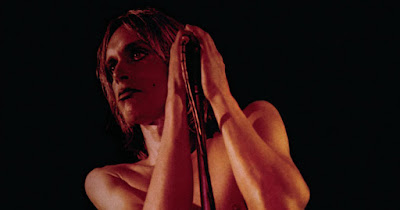 Iggy Pop's always fascinating 6Music show finds him in grizzled elder statesman mode, a long way from my original introduction to the man and his music via the Iggy & the Stooges LP 'Raw Power'. In 1973 I dug deep into pocket money reserves to a secure copy of the album without having heard a note, based entirely on the Bowie connection and discovered that although I didn't know what the hell this music was, the dense onslaught of sound was utterly thrilling. At the same time, every article I read and photo I saw of the band frankly terrified me. I was 13 years old at the time and would subsequently meander through the highways and byways of Glam, Heavy Rock, Metal and Prog before reacquainting myself with exactly this kind of glorious racket towards the end of the 1970s.

Head over to The (New) Vinyl Villan and enjoy Swiss Adam's excellent Iggy Pop ICA.
Posted by The Swede at 09:46

If ever anyone asks you to define a glorious racket just refer them to this song!

My first Stooges album too, as raucous an introduction as you're gonna get. Although I think the first one and Funhouse are both better.

Been awfully noisy over here this week... and I thank you.